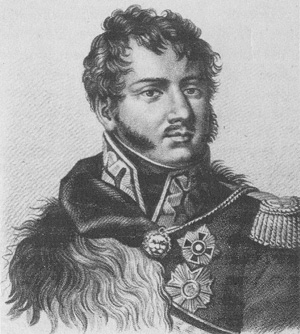 Josef Anton Poniatowski was a Polish patriot and the only marshal created by Napoleon that was not French. With a personal motto of "God, Honor, Fatherland", he was a dashing figure and ladies man, but rumors said he was dominated by a woman ten years older. The French for their part recognized his abilities and honor and nicknamed him the Polish Bayard.

The son of a Polish noble in the service of Austria, Poniatowski initially followed his father's footsteps by entering the Austrian army as a lieutenant in 1778. By 1787 he was a lieutenant colonel of dragoons, and the next year he was made an aide-de-camp to the Austrian Emperor Joseph II. He volunteered to lead an infantry column in an assault on the fortress of Sabatch and was badly wounded by a shell burst that hit his thigh, and this was his last major participation with the Austrian army.

In 1789 Poniatowski resigned from Austrian service but first made sure that he was formally released from his oath not to bear arms against Austria. Returning to Poland, he joined the army as a major general due to his uncle being the king of Poland, Stanislaus II. When the Russians invaded in 1792, Poniatowski took command of the Polish Army of the Ukraine and one of his lieutenants was the notable Thaddeus Kosciuszko. Although badly outnumbered, he defeated the Russians at Zielenka and Dubienka but was ultimately fighting a lost cause. When the king bowed to Russian interests, Poniatowski was so disgusted that he resigned. Believing the king could have inspired a national uprising against Russia, he wrote a pamphlet promising revenge against Russia and was promptly banished from Poland.

After traveling to Vienna and then Brussels, Poniatowski returned to Poland when Kosciuszko began his uprising in 1794. Initially he refused a command and fought as a common soldier, but Kosciuszko eventually persuaded him to take command of a division. Unfortunately, he was surprised and badly beaten in battle, and from shame he turned his division over to Dombrowski's command. With the defeat of the uprising, he refused an offer to serve in Russia's army and then retired to Vienna until 1798, when he returned to Warsaw.

Poniatowski took no active part in events again until 1806 when the French, fresh from their victories over the Prussian army, arrived in Warsaw. Though he quickly became friends with Marshal Murat, Marshal Davout and Napoleon were suspicious of his intentions for a time. Nevertheless, and despite Dombrowski's and Zayonchek's experience fighting alongside the French, Poniatowski was selected as the Minister of War for the provisional government in Warsaw and then the Grand Duchy of Warsaw when it was created.

In 1809 during the Austrian campaigns, Poniatowski successfully led a fight against the Archduke Ferdinand in Galicia. After suffering setbacks and abandoning Warsaw, he retook the offensive and in a series of daring maneuvers successfully forced back the Austrians and seized Lublin, Sandomir, Zamosc, and Brody. Napoleon was so impressed with his accomplishments that he sent Poniatowski a saber of honor, and later Poniatowski received the awards of a Grand Eagle of the Legion of Honor and a Grand Cord of the Military Order of the Grand Duchy of Warsaw. Next Poniatowski founded an artillery and engineering school and then a hospital in Warsaw.

The year 1812 finally brought Poniatowski his chance for revenge against the Russians. Taking command of V Corps of the Grande Armée, he led them into action at Smolensk and Borodino, where he commanded the right. During the retreat, he fought at Tscherikow, Winkowo, Maloyaroslavetz, and the Berezina where he was wounded. Seeing the plight of the soldiers at the Berezina, he wept.

Once back in Poland, Poniatowski set about reorganizing what was left of the Polish army. As the allies began to circle for the blood of the French Empire, he sent a personal challenge to the Austrian Field Marshal Schwarzenberg who had wronged him, but Schwarzenberg did not accept. In the spring of 1813 he led the loyal Polish to Germany to continue to fight for the French. Throughout the months of fighting, Poniatowski was in the thick of it, and he was wounded by a lance blow on October 12th.

At the Battle of Leipzig Poniatowski took command of the right wing, and Napoleon rewarded his service and abilities by making him a marshal of France. Tragically, Poniatowski did not have long to enjoy this honor. During the fighting at Leipzig, he was shot twice, once in the arm and once in the side. The French were forced to withdraw, and when the bridge was prematurely destroyed, Poniatowski and his men were trapped in the city. Despite his wounds, he rode his horse into the Elster River, trying to escape capture. The current proved too strong, and he was swept under and drowned, having only been a marshal for three days.