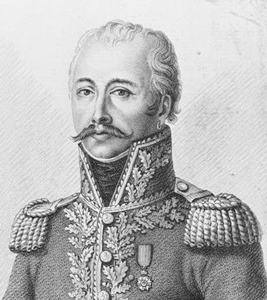 The son of an infantry captain, Antoine Guillaume Delmas' life with the military began when he became a gentleman cadet with his father's regiment, the Touraine infantry regiment, in 1781. Three years later he was commissioned as a sous-lieutenant and three years after that he was promoted to lieutenant. However, in 1788 Delmas was dismissed for insubordination, perhaps foreshadowing the troubles his career would experience thanks to his attitude. In June of 1791 Delmas was a lieutenant in the gendarmerie of the département of Corrèze, but before long he volunteered for the army where thanks to his military experience he was appointed a lieutenant colonel of the 1st Battalion of Volunteers of Corrèze in September. In 1793 he helped to defend Bingen until forced to evacuate and he served at the combat of Herxheim. That June Delmas was promoted to général de brigade and he was employed in the Army of the Rhine. After taking part in the defense of Landau, he was suspended and arrested by a representative of the people. While under arrest, orders arrived promoting Delmas to général de division and appointing him in command of the Army of the Rhine, but obviously he could not fulfill these duties. Fortunately for him, he was released a short time later.

January of 1794 saw General Delmas placed in charge of the 3rd Division of the Army of the Rhine. The next May he served at Schifferstadt and a month after that orders were issued for his arrest on June 5th. Five days later he was arrested by a representative of the people, but again he did not suffer serious repercussions and he was released a month later. After his release, Delmas was designated for the Army of the North, where he would command the 6th Division. From September to November he directed the sieges of Bois-le-Duc and Nimègue. Commanding the 4th Division of the Army of the North in early 1795, in October that year Delmas was transferred to the Army of the Rhine and Moselle. Joining Desaix's corps of the center, he saw much action in the following months, serving at the crossing of the Rhine, Rastadt, Neresheim , and Geisenfeld, and being wounded while charging at the head of cavalry near Neubourg. In January of 1797 Delmas marched his division to join the Army of Italy. That March he was placed under Joubert and he took command of a division which he led into action at Lavisio. The next month he was singled out by General Bonaparte and rebuked for beating his troops with his cane.1 A few years later, in February of 1799 he served as interim commander of the Army of Italy before retaking command of his division. Fighting with his division, he was wounded at Pastrengo and he fought at Magnano before being sent back to the Army of the Rhine.

With the Army of the Rhine, Delmas commanded the 7th Division of the right wing of the army, serving under Lecourbe. For a short time he was in charge of the 6th Division, and then in April he was placed in command of the 1st Division of the Reserve Corps of the Army of Rhine. Delmas fought at Engen, Messkirch, and Biberach with this division until replaced by General Grandjean. Transferred back to Italy, he served under General Brune, distinguishing himself at Monzembano, seizing the redoubts at Salionze, and assisting in the attack on Verona. In April of 1801 he commanded a division of Piedmont but was relieved of command after his troops mutinied.2 Delmas was given the position of inspector general of infantry but unfortunately his attitudes got him into trouble yet again. In May of 1802 he was exiled from Paris, ordered to stay at least 30 miles from the city for his opinions on the Concordant with the Pope. Two years later, in 1804, he was arrested at the time of Moreau's trial and he was exiled to Porentruy until 1813.

After the Russian campaign of 1812, there was a need for experienced officers and Delmas requested and was returned to active duty. Taking command of the 9th Division of Ney's III Corps, he led the division into combat at the Battle of Bautzen. Made a Knight of the Legion of Honor that year, he fought at the Katzbach and then the Battle of Leipzig . During the Battle of Leipzig a cannonball struck him in the right hip and he was taken to the hospital, dying of his wounds two weeks later.