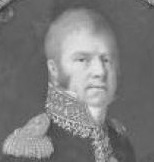 The son of a watchmaker, Jean Pierre Girard was also known as Jean Pierre Girard dit Vieux. He enlisted in the Swiss Guards in 1768 but twelve years later he was dismissed from the army in 1780. After the onset of the French Revolution, in September of 1791 Girard became the lieutenant colonel of the 3rd Battalion of Volunteers of Bec d'Ambès. In 1792 he and his men were sent to the Army of the Alps and then in 1793 he joined the Army of the Rhine. That September he commanded the camp of Niffer and then in November he was promoted to général de brigade. The next month Girard joined Férino's division and he fought at Geisberg. In 1794 he served at Trippstadt and in October of 1795 he went on leave. Girard returned to his brigade in the army in April of 1796 and then on October 2nd he fought at Biberarch. On the 11th he distinguished himself in the advance guard entering the Val d'Enfer and then on the 19th he fought Emmendingen. In April of 1797 Girard took command of a division in the right wing of the Army of the Rhine and Moselle and in 1798 he was designated for the Army of England. Later that year he was named commander of the département of Léman. In 1799 Girard began serving with the Army of the Danube and then the Army of Switzerland, and in 1800 he served with the Army of the Rhine.

During the years of peace that followed, Girard was named commander of the département of Pas-de-Calais in the 16th military division. He remained there until November of 1805 when he took command of a brigade in the Army of the North at Antwerp. However, in January of 1806 Girard returned to Pas-de-Calais. He finally left Pas-de-Calais for more active service when In April of 1809 he took command of a brigade in Demont's 4th Division of Marshal Davout's III Corps. During the Danube campaign against the Austrians, Girard served at the Battle of Aspern-Essling in May and then the Battle of Wagram in July. Afterwards he was named a Grand Officer of the Legion of Honor and he returned to command the département of Pas-de-Calais. He remained in this position until his death in March of 1811.