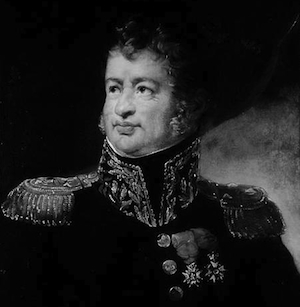 The father of famed author Victor Hugo, Joseph-Léopold-Sigisbert Hugo was an officer in the French army who spent much of his career with Joseph Bonaparte. Hugo was the son of a carpenter but chose to join the military as his career path. In September of 1788 he joined the army in the regiment of Beauvoisis and by 1792 he was serving in the staff of the Army of the Rhine. In January of 1793 Hugo fought in the Palatinate where he was wounded in the neck by a ball and afterwards he returned to Strasbourg to recover. After recovering, that May he joined the 8th Battalion of Bas-Rhin and then went to serve in the Vendée. While there he was wounded in the right foot at Vihiers and also fought at Montaigu before fighting at Coudray against the Chouans where he personally killed the leader La Perdrix.

In 1796 Hugo joined the 20th Demi-Brigade at Grenelle and was later assigned to report to the 1st Council of War of the 17th military division. In 1799 he was with the staff of the 4th military division and then in April of 1800 he rejoined the staff of the Army of the Rhine. Now back with the Army of the Rhine, Hugo was assigned to the reserve and fought at Thiengen, Engen, and Messkirch in May. That June he was promoted to chef de bataillon on the field of battle, and then in September he was placed as commander of Lunéville. Hugo finished off the year fighting at the Battle of Hohenlinden in December.

During the peaceful years, Hugo served as commander at Cleves and later in the 20th Ligne. During this time his son Victor was born and he also refused to sign a document against General Moreau. In 1805 he traveled to Corsica, Elba, and Genoa before joining the Army of Italy, distinguishing himself there and fighting at Caldiero .

In 1806 Hugo served in the Army of Naples and then entered into the service of Naples when Joseph Bonaparte became King of Naples. One of his first tasks was to take part in stopping the bandit Fra Diavolo, and Hugo and his men followed Fra Diavolo throughout Abruzzo for twenty nine days. They finally caught up to Fra Diavolo and destroyed his band, also dispersing any other bandits and insurgents they came across.

Hugo's next post came in 1808 when he was sent to Gaeta to become deputy commander of the Royal Corsican Regiment. He then returned to Naples where he became an aide-de-camp to King Joseph Bonaparte and was rewarded as a Commander of the Order of Two Sicilies. When Joseph became King of Spain, Major Hugo followed him to Madrid where he organized the Royal Foreign Regiment. Hugo was put to work and he seized Avila and then was made governor of that area and inspector general of Spanish troops. Joseph rewarded him by making him a Commander of the Royal Order of Spain and a count.

Hugo continued to serve as Joseph's aide, and 1811 was a very busy year for him. He was appointed governor of Guadalajara, Siguenza, and Molina d'Aragon and commander of the infantry of the Spanish Guard. That year he also fought guerillas at Aunon and on the Tagus, and then in October was wounded by a lance to the hand at Sanguessa. The next year he was named commander of Madrid and then took command of the rear guard during the retreat from there. In 1813 Hugo fought at the Battle of Vitoria in June where he saved Joseph Bonaparte, and a few days later he was made the premier aide-de-camp to Joseph.

Soon thereafter Hugo returned to the service of France with the rank of major. In January of 1814 he became commander of Thionville where he was besieged for 88 days and refused to follow the order from King Louis XVIII to abandon the city after Napoleon had abdicated. Afterwards, he was put on non-activity but was retroactively recognized as holding the rank of maréchal de camp since September 11, 1813. Despite being on non-activity, he received a few rewards from the Bourbons, including being made a Knight of Saint Louis and an Officer of the Legion of Honor.

With Napoleon's return from Elba in 1815, General Hugo was again named commander of Thionville. He once again refused to surrender the city and finally left the city in November without having surrendered the keys to the city to the Allies.