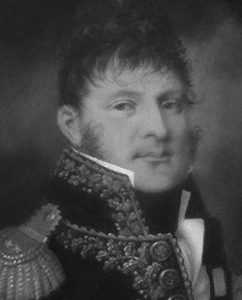 A career soldier, Pierre-Augustin Hulin's military career began in 1771 when he enlisted as a soldier in the infantry regiment of Champagne. Two years later he was serving with the Swiss Guard, but he was dismissed in 1776 and he went on to the infantry regiment of Touraine. In 1779 Hulin was dismissed again and he joined a regiment of volunteers maintained by the Republic of Geneva. Six years later he deserted and then rejoined the Swiss Guard, but then in 1787 he was again dismissed and he took on a new job as a director of laundry service.

With the arrival of the Revolution in 1789, Hulin quickly became an active participant. On July 14th, 1789, Hulin marched at the head of a large group of citizens to the Bastille, where he directed two cannons to take up a position opposite the gates of the Bastille. These cannons then convinced the commander of the fortress, the Marquis de Launey, to surrender. Hulin took the marquis prisoner and tried to lead him back to the Hotel de Ville, but a mob overwhelmed them and the marquis was killed.

For his extraordinary role in the events of the storming of the Bastille, Hulin was given a command in the National Guard. He went on to take part in the march on Versailles of the 5th and 6th of October and afterwards he was named a capitaine in the company known as the Vainqueurs of the Bastille. The next year Hulin served in the 8th Chasseurs of the Paris National Guard, and in 1792 he participated in the events of the 10th of August where the Tuileries was besieged.

In late 1792 Captain Hulin was sent to the Army of the North and the next year he fought at the Battle of Neerwinden where he was wounded. Hulin was arrested in September of 1793 and then thrown into prison at l'Abbaye. He remained in prison until after the Thermidorian Reaction and fall of Robespierre and he was finally released in August of 1794. At the end of 1794 he was allowed to return to the infantry, and then in February of 1795 he became an aide-de-camp to General Haquin in the Army of Italy. Hulin was promoted to chef de bataillon in May of 1795 and he then took part in the campaigns in Italy of 1796 under the leadership of General Bonaparte. During that time he served in the advance guard under Dallemagne and he temporarily commanded at Livorno before being promoted to chef de brigade in August.

In 1797 Hulin joined the staff of the Army of Italy and in 1798 he was named commander at Milan and then Toulon. The next year he served as commander at Bologne before being forced to evacuate that city and fall back to Genoa. January of 1800 saw Hulin being sent to Paris, and afterwards he became the chief of staff of Watrin's division in the Army of the Reserve. Taking part in the Italian campaign that year, Hulin distinguished himself at Châtillon and then fought at Ivrée in May before being named commander of Milan in June.

Hulin's next appointment came in 1802 when he was named commander of the Grenadiers à Pied of the Consular Guard. The following year he received a promotion to général de brigade, and then in 1804 he presided over the commission at Vincennes that tried the Duke of Enghien. In 1805 when the French army marched east to confront the threat of the Third Coalition, Hulin served in the Grande Armée and was then named commander of Vienna after the French took that city. The next year he took part in the campaign against Prussia and he was named commander of the city of Berlin after the Prussian capital was taken. In August of 1807 Hulin was promoted to général de division and named commander of the 1st military division in Paris and Governor of Paris. He would hold this command for the next seven years, and in the meantime he became a Count of the Empire, Commander of the Iron Crown, and Grand Officer of the Legion of Honor.

In 1812 when General Malet escaped from a mental asylum and tried to overthrow the government while Napoleon was in Russia, Malet approached Hulin with false orders to assume command of the troops in Paris. When Hulin began to question the orders, Malet drew his pistol and shot Hulin in the face, leaving him for dead. Luckily for Hulin, he survived the encounter with only a broken jaw, and Malet was arrested a short time later.1

In 1813 General Hulin received the Grand Cross of the Order of Reunion and in 1814 he rallied to Louis XVIII after Napoleon's abdication in April. Nevertheless, the Bourbons removed him from command, and then when Napoleon escaped from Elba to resume power for the Hundred Days in 1815, Napoleon reinstated Hulin as Governor of Paris. After Napoleon's second abdication, Hulin was proscribed by the Bourbons and he fled to Germany. He stayed in Belgium for a period of time before moving to Holland. He was finally allowed to return to France in 1819.