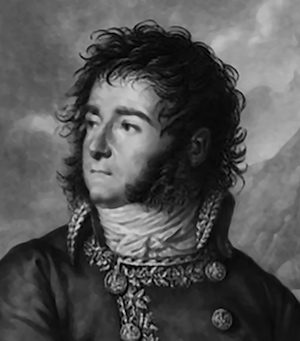 The son of a farmer, Jean Antoine Marbot first joined the army in 1773 when he joined the guard of the corps of the king. In 1781 he joined the Dauphin dragoons and then in 1786 he was dismissed from the army. 1790 found Marbot working as an administrator in the département of Corrèze and in 1791 he was elected to the legislature. In 1792 he joined the Army of the Pyrenees and in February of 1793 he was promoted to capitaine in the Legion of Montagnes. Two months later Marbot was promoted to chef de bataillon and then in May he took charge of the defense of the valley of Ariège. In August of 1793 he was promoted to général de brigade in the Army of the Eastern Pyrenees and in October he was ordered to defeat the rebels of Aveyron. On Christmas Day Marbot was promoted to général de division and named commander of the maritime coasts. In May of 1794 he took command of the camp of Toulouse and then at the end of June he joined the Army of the Western Pyrenees. Next Marbot took command of the 2nd Division at Saint-Jean-Pied-de-Port in September and then in October he served at the combat of Roncevaux. He went on to command the 4th Division and then he took command of the 1st Division in April of 1795. In May Marbot won at Marquirnechu and then in October he began to serve as a deputy of Corrèze in the Council of Ancients.

In the summer of 1799 Marbot returned to the army, taking command of the 17th military division at Paris. In September he joined the Army of Italy where he eventually took command of the 3rd Division of the right wing under General Soult. On April 6th Marbot fought at the combat of Cadibona where he was wounded by a shot to the leg. Marbot became one of the many French troops trapped at the Siege of Genoa and he died of the epidemic that decimated the city and troops during the siege. His son Jean Baptiste Antoine Marcellin Marbot became a famous officer and aide-de-camp during the French Empire and later wrote popular memoirs.