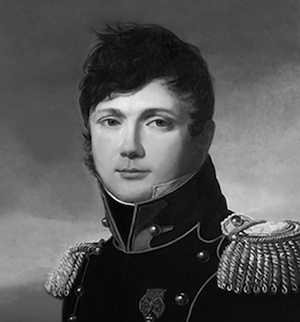 Cavalry officer and aide-de-camp to Marshals Augereau, Lannes, and Masséna who is well known for his memoirs

The son of General Jean Antoine Marbot, Jean Baptiste Antoine Marcelin Marbot enrolled in the school of Sorrèze and afterwards he enlisted in the 1st Hussars in September of 1799. At the end of the year he was commissioned as a sous-lieutenant and then in 1800 he took part in the Siege of Genoa where his father was serving. When Marbot's father died during the siege, Marbot assisted at the funeral. In June of 1801 he joined the 25th Chasseurs and then in September of 1802 he was detached to the school of horsemen of Versailles. In August of 1803 Marbot became an aide-de-camp to General Augereau and he served at Bayonne, and then in 1804 he served at Brest and was promoted to lieutenant.

Marbot took part in the campaigns of the Grande Armée from 1805 to 1807 against Austria, Russia, and Prussia. In January of 1807 he was promoted to capitaine and then he served at the Battle of Eylau in February. During the battle Marbot was wounded by a bayonet to the left arm while carrying orders from Marshal Augereau to the 14th of the Line. In 1808 he became an aide-de-camp to Marshal Lannes and he served in the Army of Spain. Marbot was wounded by a sabre blow to the forehead in a reconnaissance at Agreda in December and then he served at the Siege of Saragossa in February where he was wounded by shot while directing an attack on a fortified convent. He followed Marshal Lannes to Germany and the Danube campaign and he served at the Battle of Aspern-Essling where he was wounded by a shot of grapeshot in the right thigh. After the death of Lannes, Marbot was promoted to chef d'escadrons and Marshal Masséna took him on as an aide-de-camp. Marbot was then again wounded on July 11th at Znaim by a shot to the left wrist.

Marbot accompanied Masséna to the Army of Portugal in 1810 and on May 11th, 1811 he was wounded twice at the combat of Miranda del Corvo, first by a sabre blow to the face and then by a sabre blow to the stomach. He returned to France later in 1811 where he served as chef d'escadrons with a regiment of chasseurs à cheval. In January of 1812 Marbot joined the 23rd Chasseurs à Cheval and he served with the Grande Armée on the campaign against Russia that summer. He fought at the combat of Jacobowo at the end of July where he was wounded by a shot to the left shoulder. During the retreat from Russia Marbot was promoted to colonel of the 23rd Chasseurs à Cheval in November. In early December he fought at the combat of Piechenitzchoui where he was wounded by a lance blow to the right knee.

Marbot served in the campaigns in Saxony in 1813 and he was named an Officer of the Legion of Honor and Baron of the Empire in September of that year. He fought at the Battle of Leipzig in October where he was wounded in the right thigh. Marbot continued to serve in the defense of France until Napoleon's abdication in April of 1814. The restored Bourbons named him a Knight of Saint Louis and colonel of the 7th Hussars. When Napoleon resumed power in 1815 for the Hundred Days, Napoleon kept Marbot in charge of the 7th Hussars. Marbot and his men took part in the campaign in June and he was wounded by a lance blow to the chest at the Battle of Waterloo. When the Bourbons were once again restored, his name was included on the ordonnance of July 24th, 2815 and he was exiled from France. Marbot established his new home at Offenbach in Germany and he was allowed to return to France in 1818.

Back in France, Marbot wrote a criticism and refutation of the books written by General Rogniat. Napoleon had read Rogniat's work and Marbot's work arrived in March of 1821 and Napoleon was very appreciative of Marbot's work. Napoleon added Marbot to his will to give him 100,000 francs so Marbot could continue to write for the defense of the glory of French armies and to counter the slanderers and the apostates. After Louis Philippe came to power in 1830, Marbot resumed his military career. Marbot died in 1854 and his memoirs were first published in 1891. His memoirs have achieved distinction for their good writing and engrossing style.