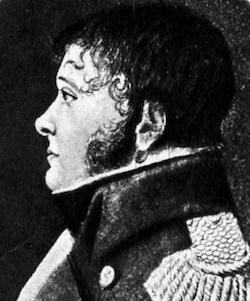 Beginning his naval career as a cabin's boy on merchant ships, Jean-François Renaudin became a pilot and made a number of voyages to Saint-Domingue early in his career. In 1776 he joined the French navy as an officer and then in 1779 he was promoted to lieutenant of frigate. In 1780 Renaudin took command of the flute Dorade and during the next two years he supported four different combats before moving on to other commands. In 1786 he was promoted to sous-lieutenant of vessel and he continued to make a number of trips to Saint-Domingue.

After the onset of the Revolution, in 1792 Renaudin was promoted to lieutenant of vessel. Commanding a variety of ships, he was promoted to captain of vessel at the start of 1793. In 1794 Renaudin took command of the vessel Vengeur in Admiral Villaret-Joyeuse's squadron. Trying to protect the shipment of grain from the United States, Renaudin took part in the naval battle on the 1st of June of 1794 where his ship was eventually forced to surrender. Due to the tenacity of his men's fighting before ultimately losing the ship, the event was immortalized in paintings and propaganda.

Renaudin was returned to France to August where he immediately took command of Jemappes in Villaret-Joyeuse's squadron and was later promoted to rear admiral. Taking command of a squadron, Renaudin sailed with six ships for the Mediterranean in 1795 and arrived at Toulon to join up with the fleet of Admiral Martin. That July he took part in the combat at the isles of Hyères. In 1798 Admiral Renaudin was sent to Brest to command a squadron there. The following year he took command at Toulon and then later he became inspector general of ports from Cherbourg to Bayonne. He retired from the navy in 1801.