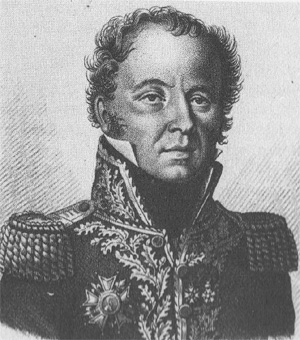 General who led the heroic defense of Saint-Sébastien in 1813

In 1799 General Rey was employed in the 6th military division and then the 19th military division. During the years of peace that followed, he took command of the département of Jemappes in the 24th military division. When war broke out in 1805, Rey was sent to command the camp of Boulogne after the various corps had left for battle. He maintained the camp for the next three years and was then created a Baron of the Empire in 1808.

In August of 1808 Rey was appointed chief of staff to Gouvion St. Cyr's corps in the Army of Spain. He went on to serve at Barcelona and the first siege of Tarragona and then commanded a reserve brigade. In 1811 Rey was appointed Governor of Saint-Sébastien where he would remain for the next few years. After the French loss of the Battle of Vitoria in June of 1813, the British laid siege to Saint-Sébastien which Rey heroically resisted. He took part in two sorties and repulsed multiple assaults from the enemy. Unfortunately for Rey, at the end of August an explosion of a magazine caused a panic among his men and they could not prevent the British from making their way into the city. Rey fell back into castle where he and his men continued to hold out until they finally ran out of food and then surrendered.

Rey was transported to England as a prisoner of war, but due to his heroic resistance at Saint-Sébastien, Napoleon promoted him to général de division and made him a Grand Officer of the Legion of Honor despite Rey being in captivity. After Napoleon's abdication in 1814, Rey was returned to France where the restored Bourbons made him a Knight of Saint Louis but also put him on non-activity. When Napoleon escaped from exile in 1815 for the Hundred Days, he placed General Rey in charge of Valenciennes. After Napoleon's second abdication, Rey retired from the military.

Rey was married to the sister of General Curial.