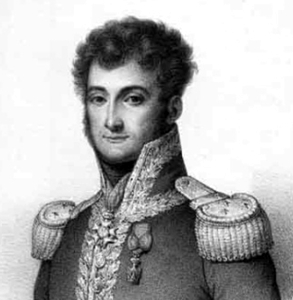 Initially joining the army as a lieutenant in the free company of Haute-Garonne in March of 1793, Louis-Victorin Cassagne was promoted to capitaine only two days later when his unit was reformed as the 8th Battalion of Haute-Garonne. Sent to the Army of the Eastern Pyrenees, that August he helped to defend the crossing of the Tet River. Seeing action in November of 1794, Cassagne distinguished himself during the fighting at Figuières. After peace was signed with Spain in 1795, Cassagne was transferred to the Army of Italy, where he soon saw action again, being wounded by a shot to the left thigh at Rocca Barbena. In March of 1796 his battalion became part of the 69th of the Line, and then later he was sent to the 18th of the Line. That August Cassagne commanded the scouts of General Masséna's division and while leading his men he was wounded near Lake Garda in the chest. Cassagne's next action came in January of 1797, when he distinguished himself at La Favorite by forcing an enemy cavalry commander to put down his weapons and surrender. Cassagne continued on the campaign, receiving another wound in March when he was hit by a shot to the left leg at Tarvis.

Cassagne was next designated for the Army of Orient where he took command of the scouts of General Bon's division. After landing in Egypt, he fought at Chebreiss and then the Battle of the Pyramids . Cassagne's next action was fought at the Siege of Acre, where he was wounded by two stabs to the left thigh, two to the left arm, and one to the hand. A promotion to chef de bataillon followed. Cassagne remained in Egypt and in 1801 he fought at the Battle of Canope where he was wounded by a shot to the right thigh. A few months later he was promoted to chef de brigade before returning to France.

Once back in France, Cassagne was employed in the garrison at Maubeuge until 1804 when he was sent to the camp of Bruges. When war broke out in 1805, he took a command in General Gudin's division in III Corps, and he served in Austria, Prussia, and Poland over the next few years. In particular, Cassagne fought at Auerstadt where he was wounded by a ball to the face. After the summer campaign of 1807, he received a promotion to général de brigade and became a baron.

In late 1807 Cassagne took command of the 2nd Brigade of Vedel's division and then in 1808 he traveled to Spain. He fought at Jaen in July, and then he was present at Bailen for the surrender of the French troops, which he protested against. As a prisoner, Cassagne was put on the ship La Minerve and transported to Marseille. Despite being part of the surrender of Bailen, due to his protests against the surrender, he did not suffer career setbacks.

General Cassagne was next sent back to Spain where in April of 1809 he joined the 3rd Division of I Corps. That July he fought at Talavera , and then the next year he served in Andalucia, where he commanded the left during the blockade of Cadiz. In 1811 Cassagne fought the guerrillas and was victorious at Medina Sidonia. That year he also became a Commander of the Legion of Honor, and he again commanded the left during a siege of Cadiz. In late 1811 he served at the Siege of Tarifa until the 4th of January, 1812. Cassagne continued to serve in Spain, commanding the 1st Brigade of the 2nd Division of the Army of the South throughout 1812. In 1813 he was promoted to général de division and he fought at Vitoria before being ordered to travel to Mainz.

After arriving in Mainz, Cassagne took command of the 1st Division of Mouton's I Corps, and he served during the defense of Dresden. When Dresden finally surrendered, he was taken prisoner and transported to Hungary. During his imprisonment, Cassagne received more awards, being named a Knight of the Iron Crown and Commander of the Order of the Reunion. Finally returning to France in June of 1814, Cassagne was rewarded as a Knight of Saint Louis and given command of the département of Haute-Garonne. When Napoleon returned from exile for the Hundred Days, Cassagne was employed in the Army of the Eastern Pyrenees. After Napoleon's second abdication, he was put on non-activity.