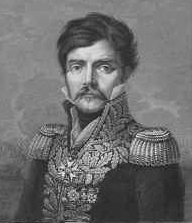 During the peace that followed, Huber served in garrison at Verdun. In 1802 he was commissioned as a sous-lieutenant and then in 1803 he began to serve at the camp of Bruges. As the Grande Armée marched out in August of 1805 to confront the Third Coalition, Huber served under Viallannes in the light cavalry of Marshal Davout's III Corps. During the campaign that fall he was wounded by a shot at Haag at the end of October and then two days later he distinguished himself at the crossing of the Traun River. A week later Huber fought at the combat of Marienzell and then in December he served at the Battle of Austerlitz. In July of 1806 he was promoted to lieutenant and then during the War of the Fourth Coalition he fought at Czarnowo in December where he was wounded in the head by grapeshot. In March of 1807 Huber was promoted to capitaine.

In 1809 Huber joined the 22nd Chasseurs à Cheval and in 1810 he served with the Army of the North before serving with the Army of Spain and the Army of Portugal. In 1811 he was promoted to chef d'escadrons and then in 1812 he became an aide-de-camp to General Montbrun. Taking part in the campaign against Russia, Huber served at Ostrowno in July where he was wounded in the left shoulder blade by grapeshot. In 1813 he was promoted to colonel of the 1st Chasseurs à Cheval and he served on the campaign in Saxony. That August Huber was attached to the 2nd Brigade of Chastel's 3rd Light Cavalry Division. During the defense of France of 1814, he was promoted to général de brigade in March and he served at the Battle of Paris.

Put on non-activity by the Bourbon Restoration, Huber was unemployed for a short period of time but also named a Knight of Saint Louis. After Napoleon returned from exile and resumed power for the Hundred Days in 1815, Huber was given command of the 1st Brigade of Piré's 2nd Light Cavalry Division in the Army of the North. Huber served during the campaign in Belgium and afterwards he was put on non-activity. He resumed his military career in 1816 and retired in 1826.