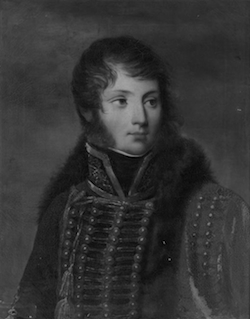 One of Napoleon's longest serving aides, Jean-Léonor-François Le Marois, also spelled Lemarois, first joined the army in May of 1793 as a lieutenant in the artillery of the National Guard of Bricquebec. Initially he was tasked to command a detachment of gunners on the coasts of Manche, but in 1794 he was sent to artillery school for four months. Upon graduation, Le Marois became an aide-de-camp to Letourneur and was then sent to the Army of the West.

In 1795 Le Marois was promoted to lieutenant and posted to the 17th military division in Paris. Later assigned to the staff of the Army of the Interior, Le Marois participated in the events of 13 Vendémaire where Napoleon defended the government from a royalist mob with a "whiff of grapeshot". A few days later, Le Marois was promoted to capitaine, and the next month he became an aide-de-camp to Napoleon. As Napoleon's aide, in March of 1796 he served as a witness at Napoleon's marriage to Josephine.1

Le Marois followed Napoleon to the Army of Italy in 1796 where his commander led the army to a series of unprecedented victories. Le Marois fought at Lodi that May, and then in September he fought at Roveredo where he was badly wounded by several sabre blows. Despite those wounds, two months later he was back in action, fighting at Arcola . Napoleon next sent Le Marois to Paris to present to the Directory the flags taken from the enemy, and there Le Marois received a promotion to chef d'escadrons.

Le Marois skipped participation in the expedition to Egypt in 1798 due to his wounds. When Napoleon returned to France in 1799 Le Marois resumed his duties as an aide-de-camp. The next year he was promoted to chef de brigade and served in the Army of the Reserve, fighting at Marengo. During the years of peace that followed, Le Marois continued to serve as an aide-de-camp and was promoted to général de brigade in 1803. Later that year he was ordered to inspect the coasts from Brest to Cancale, and after he returned in 1804 he resumed his position as an aide-de-camp.

When war broke out in 1805, Le Marois took part in the campaign that year as an aide-de-camp to the Emperor and served at Austerlitz. Afterwards, on Christmas Eve of that year he was promoted to général de division. In 1806 Le Marois was tasked to command the Adriatic coasts at Ancone, but when it became clear that the Prussians meant to declare war he was recalled to the Grande Armée to serve as Napoleon's aide-de-camp again. Le Marois took part in the campaign against the Prussians that year, fighting at and being wounded at Jena. Next he was appointed governor of Wittemberg and then he suppressed the insurrection of Torgau. That November Le Marois was appointed governor of Stettin before being sent to Bromberg and then Posen. The next month he briefly governed Warsaw before rejoining the army and then fighting at Nasielsk at the head of a brigade of dragoons. In late January of 1807 Le Marois was given command of a division tasked with guarding the Narew and Bug Rivers. That May he and his men repulsed the enemy there and then after the war was concluded he returned to France.

In late 1807 Le Marois was sent back to Ancona, but he quit his position there in mid 1808. In the meantime he was created a Count of the Empire and Grand Officer of the Legion of Honor. In 1809 Le Marois was appointed commander of Frioul and then in 1810 he was designated to command a reserve division stationed at Orleans. Falling ill, he did not leave Italy and instead remained in Frioul.

Napoleon continued to use Le Marois as an aide-de-camp for special missions, for in 1811 he sent Le Marois to inspect the coasts from Boulogne to Holland. He was also given a mobile column of troops and tasked to find deserters during this mission. The next year he expressed his disapproval of the campaign against Russia and was not included on the campaign, instead being given command of the camp of Boulogne and ordered to defend against any English attacks.

After Napoleon survived the retreat and returned to Paris, he called Le Marois back to Paris. In 1813 he sent Le Marois to Dusseldorf to command the Grand Duchy of Berg and later the 25th military division. That June Le Marois was appointed governor of Magdebourg. Trapped and besieged by the Allies, Le Marois held Magdeburg until well after Napoleon's abdication, finally surrendering the city on May 20th of 1814.

The restored Bourbons made Le Marois a Knight of Saint Louis but then put him on non-activity and refused to pay his back pay. When Napoleon returned in 1815 for the Hundred Days, Le Marois rallied to him and was given command of the 14th and 15th military divisions. After Napoleon's second abdication, Le Marois reorganized the National Guard of Rouen and then retired to Normandy.