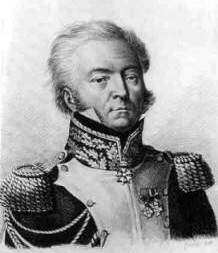 Louis Lepic was a career cavalry soldier, initially enlisting in a regiment of dragoons in Lescure in 1781. At the start of 1791 he joined the 2nd Chasseurs à Cheval, then in 1792 was promoted to captain. In 1793 Captain Lepic was promoted to chef d'escadrons and served with the Army of the West, fighting at Montaigu in September where he was wounded by a shot to the thigh. In 1796 Lepic was serving against the Vendeéns and helped Travot to capture the Royalist Charette.

Next Lepic was transferred to the Army of Italy where he would remain for a number of years. In 1799 he fought fiercely at Pastrengo, where he was wounded by saber blows to the head and shoulder and a shot to the arm. For his conduct there, he was promoted to chef de brigade of the 15th Chasseurs à Cheval on the battlefield. The next year Lepic also took part in the Battle of Marengo.

Lepic spent the next few years serving in garrisons in Italy. When war broke out in 1805, Lepic was employed in the advance guard of the Army of Italy. On December 18th, Lepic was given the position of colonel major of the Grenadiers à Cheval of the Imperial Guard, with which he served throughout the coming campaigns in Prussia and Poland.

Lepic often suffered from arthritis, and received treatment regularly from Dr. Larrey. In February of 1807, on the morning of the Battle of Eylau, Larrey assisted Lepic so he could fight in the battle. Waiting for their moment to shine in the battle, Lepic's cavalry was bombarded by artillery and he shouted out to his men, "Heads up, by God! Those are bullets, not turds!"1 As the French left reeled backwards from a Russian attack and Larrey's hospital came into danger, Lepic led his cavalry to the rescue and drove the Russians back.2

Later in the battle, as the French VII Corps began to be wiped out, Napoleon ordered a great cavalry charge to try and alleviate the situation. Lepic and his men were part of this great charge, but they penetrated too deeply and were unable to return to the French lines. A Russian officer asked them to surrender, and Lepic pointed his sabre at his men and replied, "Look at those those mugs there. Tell me honestly, sir, do they look as though they want to surrender?"3 Lepic and his men then cut their way back through the Russian line. Napoleon happily greeted him as he returned to the French line, and told Lepic that he had feared he would soon be receiving a report of Lepic's capture since it had taken so long for Lepic to return. Lepic responded, "The only report you shall ever receive will be of my death, not of my capture."4 Nonetheless, Lepic had not escaped unscathed, having received wounds to his legs and knees. A week later he was promoted to général de brigade.

In 1808, General Lepic went to Spain with his unit of the Guard. The next year he returned to France and took part in the campaign in Germany that year. He was rewarded as a Baron of the Empire and Commander of the Legion of Honor and then fought at Wagram . In 1810 he went back to Spain, and in 1811 briefly served in the Army of Portugal before returning to France.

1812 saw Lepic continuing to command his men during the campaign of Russia. In November he and his men sent Platov's cossacks reeling. In 1813 Lepic was promoted to général de division and became colonel of the 2nd Gardes d'Honneur. He served during the campaigning in Saxony that year, and then at the end of the year took command of the 21st military division. After Napoleon abdicated he was put on non-activity by the Bourbons. With Napoleon's return Lepic served in the headquarters of the Army of the North, and after Napoleon's second abdication he retired.