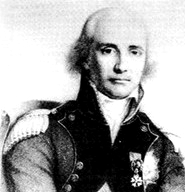 After the onset of the Revolution Marescot was promoted to capitaine in April of 1791. A year later he was at the affair of Pas-de-Baisieux where he was almost massacred, but he survived unlike General Dillon. Afterwards Marescot set out to prepare the defense of the frontier and in particular prepare Lille for an attack. He was named a Knight of Saint Louis in 1792 and that October he was wounded at the bombardment of Lille. Next he served in Belgium as an aide-de-camp to Champmorin and he took part in the action of Antwerp. In 1793 after the Battle of Neerwinden Marescot returned to Lille where he prepared the defenses of the city. Next he was denounced by the revolutionary club of Lille and therefore he was called to Paris to defend himself. Having defended himself, Marescot was promoted to chef de bataillon in November of 1793 and he then went to serve at the Siege of Toulon . During the siege he directed the works to approach and he was wounded at the advance posts of the grand redoubt.

After Napoleon took power as First Consul, Marescot was named inspector general of engineers. Next he was appointed commander of the engineers of the Army of the Reserve, and in this capacity he and his men ensured the army successfully crossed the Great Saint-Bernard pass. Afterwards he laid siege to Fort Bard and then he assisted at the Battle of Marengo. During the peace that followed, Marescot was named president of the committee of fortifications. He inspected the coasts of Rochefort and Antwerp and then in 1803 he took command of the engineers of the Army of the Coasts of the Ocean. In 1804 Marescot was named the premier inspector general of engineers and in 1805 he received the Grand Eagle of the Legion of Honor. Later that year as the war with the Third Coalition got underway, Marescot served with the Grande Armée during the campaign in Austria.

In 1808 Marescot was named a Count of the Empire and sent to inspect Cadiz, Algésiras, and Gibraltar. Afterwards he joined General Dupont's corp at Andujar in June and therefore he was with Dupont during the disastrous Battle of Bailen in July. Marescot negotiated the surrender and he was taken prisoner and sent from Cadiz to Marseille. Back in France he was dismissed from his rank and had his awards stripped from him, and then he was sent to the prison of l'Abbaye in Paris. Marescot remained in prison until 1812 when he was tried by a council of inquiry and released, but exiled to Tours. After Napoleon's abdication and the Bourbon Restoration, the Bourbons restored Marescot's rank and awards. He was also named a Commander of Saint Louis. When Napoleon returned to power for the Hundred Days, Napoleon named Marescot to the committee of defense and then sent him as inspector general of engineers of Argonne and Vosges. After the Second Restoration, Marescot retired.