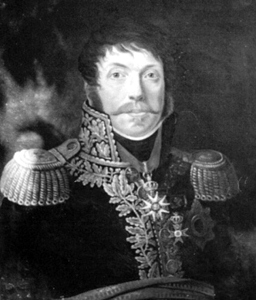 Cavalry general who served at Eylau, Aspern-Essling, and Wagram

Originally the adopted child of the Esterhazy Hussars, Jacob-François Marola Marulaz later enlisted in that regiment in 1784 just because his fifteenth birthday. After the onset of the Revolution, in 1792 he was assigned to the Army of the North and that October he was commissioned a lieutenant in the scouts. In 1793 Marulaz was sent to the Vendée where he was promoted to capitaine and he became an aide-de-camp to General Saloman. During that autumn he took Pontorson, was wounded by grapeshot to the left hip at Dol, took Laval, and then seized the Vendéens' supplies at Blain. Marulaz next returned to the Army of the North in 1794 and he fought at Menin in April where he was wounded by a sabre blow to the right check. A week later he received a promotion to chef d'escadrons and then later in May he fought at Bousbecques where he was again wounded. That September Marulaz served at Boxtel where he took 500 prisoners.

In 1795 Marulaz was sent to the Army of the Rhine and in September he served at Neckarrau. The following month he seized Oppenheim and served at Frankenthal. In September of 1796 Marulaz took part in the combat of Immenstadt and then in October he was wounded by a shot to the right arm near Huningue. Marulaz stayed with the Army of the Rhine throughout 1797 and then in 1798 he joined the Army of Switzerland. In March of 1798 he served during the attack on Berne and then in December he was promoted to chef de brigade of the 8th Hussars. Continuing to serve in Switzerland, Marulaz served near Zurich at the combats of June of 1799 and during this time he was wounded at one combat by five shots, four to the chest and one that went entirely through him. Somehow he recovered from his wounds enough to serve again for that October he fought against the Cossacks.

In late 1799 Marulaz returned to the Army of the Rhine and in May of 1800 he saw plenty of action. On May 1st, he seized a cannon and took 800 prisoners at the crossing of the Rhine, and a few days later he served at Stockach, then Messkirch, and then Memmingen. Marulaz finished the month by seizing Landsberg. In June he took part in the crossing of the Danube and then hostilities were ceased for a period of time. When hostilities resumed in the winter, Marulaz served in December where he forded the Chiemsee Lake and served before Salzbourg. Once the campaign was concluded, he received a sabre of honor in 1801.

During the years of peace that followed, Marulaz served in the Army of the Coasts of the Ocean. In 1804 he was named a Commander of the Legion of Honor and in 1805 he was promoted to général de brigade and assigned to command the département of Haute-Saône and the 6th military division. After the campaign of 1805 began that fall, Marulaz took command of a cavalry brigade as part of Marshal Kellermann's III Reserve Corps that covered the Rhine. In 1806 he returned to the 6th military division until that October when he was called to the Grande Armée to replace the ailing Verdières. Marulaz joined the Grande Armée and took command of the 2nd Brigade of Hautpoul's 2nd Heavy Cavalry Division. In December he was named commander of the brigade of light cavalry of Marshal Davout's III Corps and he served at Tsarnowo and then Golymin where he was wounded by a bayonet to the right knee. Marulaz continued to serve during the winter campaign, seizing Ostrolenka in January of 1807 and then charging at the Battle of Eylau in February. After Eylau, he took 300 prisoners at Domnau. When the campaign resumed that spring, he took 5000 prisoners near Labiau after the Russians had been defeated at Friedland.

Marulaz next took a leave to return to France to rest. In 1808 he was named commander of the département of Haute-Saône again and he received numerous awards, being named a Baron of the Empire, a Commander of the Order of Hesse-Darmstadt, and a Commander of the Military Order of Baden. In 1809 Marulaz briefly commanded the cavalry of the 5th military division at Strasbourg before he took command of the light cavalry of Marshal Masséna's corps. After the Austrian attack that April, he served on the Danube campaign, fighting at Landshut and Neumarkt in April and then at Ebersberg and Aspern-Essling in May. At the Battle of Aspern-Essling, Marulaz was again wounded, this time by a shot to the right thigh. Regardless of his wound, he continued to serve and took part in the Siege of Raab in June and then the Battle of Wagram in July, where he was again wounded by a shot to the leg. Less than a week after that battle Marulaz received a promotion to général de division.

Marulaz's active campaigning days were coming to an end, for in September of 1809 he again took command of the 6th military division at Besançon. He remained there for the next few years and his next major combat came during the defense of France when he won at Baume-les-Dames on December 31st, 1813. After Napoleon's abdication in 1814, the restored Bourbons named Marulaz the inspector general of cavalry of the 18th military division and a Knight of Saint Louis. When Napoleon resumed power in 1815 for the Hundred Days, he returned Marulaz to his position as commander of the 6th military division. After Napoleon's second abdication, the restored Bourbons put Marulaz on non-activity and Marulaz then retired from the army.