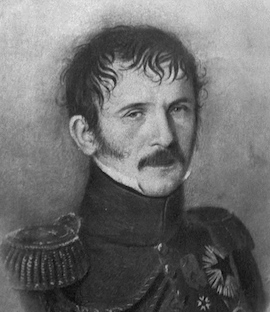 The son of an attorney and brother to the member of the National Convention known as Merlin de Thionville, Christophe Antoine Merlin joined the 4th Battalion of Volunteers of the Moselle in August of 1791. That December he was commissioned as a sous-lieutenant and then in May of 1792 he was promoted to lieutenant. Serving with the Army of the North, Merlin was promoted to capitaine in October of 1792. In 1793 he served as an aide-de-camp to General Favart and then General Bécourt and then in August he was promoted to chef d'escadrons. In February of 1794 Merlin was sent to the Army of the Eastern Pyrenees where he served as chief of staff to the cavalry division commanded by Dugua. That November he was wounded by a blast of a shell at the affair of Escalo and then in June of 1795 he was promoted to chef de brigade. After peace was signed with Spain, Merlin was put on non-activity as the armies of the Pyrenees were reorganized and split apart.

In January of 1796 Merlin received command of the 4th Hussars. He served with the Army of the Sambre and Meuse and in 1797 he served in Daurier's division and was wounded at Steinberg by a sabre blow to the right arm. In 1799 Merlin served with the Army of the Danube and he was wounded again that March at Pfullendorf. The next year he served with the Army of the Rhine and then in 1801 he began serving in the garrison at Cambrai. In 1803 Merlin began serving with the Army of Hanover and then in 1805 he was promoted to général de brigade and sent to Italy. That September he took commanded of the 2nd Brigade of Chasseurs à Cheval in General Espagne's division and then in 1806 he joined Mermet's cavalry division and the Army of Naples. After the Kingdom of Naples was conquered, Merlin transferred to the service of Naples and he was made commander of the isle of Ischia and an equerry to King Joseph Bonaparte. He continued to serve in Naples in 1807 and he was made an aide-de-camp to Joseph Bonaparte.

When Joseph Bonaparte departed Naples to become King of Spain, Merlin followed Joseph as an aide-de-camp and he commanded Joseph Bonaparte's cavalry escort during Joseph's entry into Spain. Next Merlin transferred into the service of Spain and on the same day he was promoted to général de division. In April of 1809 he took command of the light cavalry division of II Corps of the Army of Spain and then in July his division was transferred to IV Corps. That month Merlin fought at the Battle of Talavera and then the next month he fought at Almonacid. Merlin received the honor of being named captain general of the guards of King Joseph, but he remained in command of his division. In November of 1809 he distinguished himself at the Battle of Ocaña .

Merlin continued to serve under Joseph Bonaparte until January of 1814 when he was readmitted into French service. At the beginning of the year he briefly served in administrative positions and then in February he took command of a division of light cavalry of II Cavalry Corps in Champagne. That March he served under Marshal Marmont at the combat of May-en-Multien, he fought at the action of Reims, he chased the cossacks from Vertus, and he served at the Battle of Paris.

After Napoleon's abdication and the Bourbon Restoration, Merlin was named inspector general of cavalry for the 5th military division. He was also rewarded as a Knight of Saint Louis. When Napoleon returned from exile and resumed power for the Hundred Days in 1815, Merlin was given command of the 8th Cavalry Division which formed part of V Corps, ultimately serving under General Rapp on the Rhine. Merlin fought at the combats of June 24th and June 28th, and after the Second Restoration he was briefly put on non-activity. He resumed his military career in 1816.