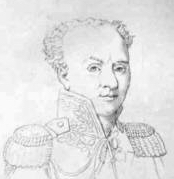 Born into a noble family, Charles-Joseph Randon de Malboissière de Pully first joined the French army at age sixteen in 1768. The following year he was admitted with the rank of lieutenant to the 1st Company of Musketeers of the King, and then in 1770 he was promoted to capitaine in the dragoons of La Rochefoucauld. Pully continued to serve in France, serving under Marshal de Broglie in 1776 and then Marshal de Vaux in 1783. In 1784 his commanding colonel d'Autichamp wrote in a report that Pully "is a good officer but would never be but a poor senior officer." Pully received a promotion to chef d'escadrons in 1788 and then another promotion to lieutenant colonel in 1789.

Despite his noble birth, Pully rallied to the Revolution and in 1792 he was promoted to colonel and placed under General Kellermann in the Army of the Center. The day before the Battle of Valmy, Pully received a promotion to maréchal de camp. Next he was assigned to the Army of the Moselle and in December he took command of the reserve of this army. In March of 1793 Pully was promoted to général de division and he took command of the Corps of Vosges in the Army of the Moselle. Six months later in September he was suspended from the army and imprisoned as a suspected anti-revolutionary. Pully avoided the guillotine but remained in prison until he was released in November of 1794.

In November of 1799 Pully was given command of a division in the Army of Italy, and then in January of 1800 he was named commander of the 15th military division at Rouen. In this position he helped Gardanne to disarm the Chouans in the 14th military division and afterwards he was sent to the Army of the Rhine. Later that year Pully was sent to the Army of Grisons where he served at the crossing of the Splugen and then at Trente before he occupied part of the Tyrol. In September of 1811 he was given command of a cavalry corps in the Cisalpine Republic.

General Pully remained in Italy throughout the years of peace that followed, and when war was declared in 1805 he took command of a division of cuirassiers under Marshal Masséna in the Army of Italy. That November he distinguished himself at the crossing of the Tagliamento. Pully continued to serve in Italy over the following years, for a time serving as inspector general. In 1809 he took command of a division of dragoons for the war against the Austrians. Serving in Prince Eugene's army, Pully fought at the Battle of the Piave and then at the Battle of the Raab . After the successful conclusion of the campaign, Pully was named a Count of the Empire and then ordered to form new cavalry regiments and inspect their depots. In 1812 he was appointed governor of the imperial palace at Meudon and then in 1813 he was named colonel of the 1st Guard of Honor at Versailles.

After Napoleon's abdication in 1814, the restored Bourbons named Pully a Grand Officer of the Legion of Honor. When Napoleon returned from exile and resumed power in 1815 for the Hundred Days, Pully did not leave the country and therefore he was put at the disposition of the Ministry of War. In June he was ordered to inspect the depots and then help prepare the defense of Paris. After Napoleon's second abdication, Pully retired from the army in September of 1815.