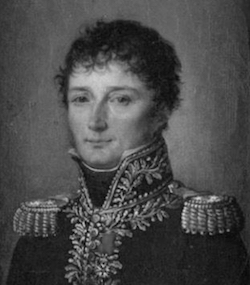 Chief of staff who frequently served under General Saint-Hilaire

Volunteering during the Revolution, Jean-Pierre Baillod joined the 11th Battalion of Ain in September of 1793 and only a few days later he was named a capitaine. Sent to the Army of the Alps, he served there until December of 1794 when he went to the Army of Italy. Baillod next served under the orders of the 8th military division in the Army of Italy and in September of 1796 he was officially attached to the general staff of that army. Almost four years later in January of 1800 Baillod was promoted to chef de bataillon, and then in 1802 he joined the 22nd Light. In 1804 he joined the general staff and he was employed at the camp of Saint-Omer.

In 1805 as the Grande Armée moved east to deal with the threats of the Third Coalition, Baillod served in General Saint-Hilaire's division of IV Corps. He served throughout the campaigns of 1805 through 1807 and he was wounded by a shot to the lower belly at the Battle of Eylau in February of 1807. Baillod's next position came as chief of staff of Saint Hilaire's corps and he then served with the Army of Germany.

When Austria attacked in 1809, Baillod continued in his role as St. Hilaire's chief of staff though he now served in II Corps. Baillod served throughout the campaign and during this campaign he was named a Commander of the Legion of Honor. He served at the Battle of Aspern-Essling where he was wounded by a shot to the right knee and his commander St. Hilaire was mortally wounded by cannonball to the foot. When General Grandjean took command of St. Hilaire's division, Baillod became Grandjean's chief of staff and he was also named a Baron of the Empire. After the conclusion of the campaign, Baillod returned to France in February of 1810.

In August of 1810 Baillod was named chief of staff of the 14th military division. In 1811 he was promoted to général de brigade and named commander of the département of Manche. The next year he was employed at the camp of Boulogne and he remained there until ordered to the front in January of 1813. He joined the army as General Lauriston's chief of staff and Lauriston later took command of V Corps for the campaigns in Germany of 1813. Baillod continued to serve as chief of staff and in September he was named a Knight of the Iron Crown. That October he fought at the combat of Gorn and then at the Battle of Leipzig where he was badly wounded by the explosion of a shell that shattered his lower jaw. Due to his wound, Baillod was sent back to France to recover. In December Baillod was named chief of staff to Marshal Victor, but he refused the position due to his poor health and he was instead returned as commander of the département of Manche.

After Napoleon's abdication and the Bourbon Restoration in 1814, Baillod was named a Knight of Saint Louis. When Napoleon escaped from exile and resumed power in 1815 for the Hundred Days, Baillod was named chief of staff of the 14th and 15th military divisions. He faithfully served in this position until he was put on non-activity in October of 1815.