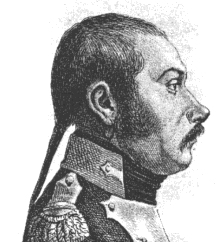 The son of a chef, Jean-Barthélemy-Claude-Toussaint Darmagnac volunteered to join the 1st Battalion of Haute-Garonne in September of 1791. Three months later he was promoted to capitaine and then he joined the Army of Italy. With the Army of Italy, in 1793 Darmagnac served at the action of Nice, at Fort Montalban, at the recapture of Sospello, and at the defense of the pass of Loignon. In February of 1794 he was promoted to chef de bataillon and that September he served at Cairo. In June of 1795 Darmagnac was taken prisoner at the defense of Savona but he was exchanged only three months later. General Bonaparte took command of the Army of Italy in 1796 and Darmagnac served throughout that campaign. That April Darmagnac served at Montenotte, Millesimo, Mondovi , and Cherasco. The following month he served at the crossing of the Po and at Fombio, Lodi , the action of Pizzighettone, the action of Milan, and the action of the Mincio. Darmagnac continued to fight, for in June he served at Verona and then in August he was wounded by a shot to the left thigh at the recapture of Lonato but he went on to fight at Castiglione only two days later. In December of 1796 he took command of the 2nd Battalion of the 32nd of the Line in Masséna's division and then in January of 1797 he served at Rivoli and La Favorite. As the Army of Italy continued to apply pressure to the Austrians, in March of 1797 Darmagnac served at Saint-Michel, Bellune, and the Tagliamento. Later he served at Tarvis and Freisack.

In January of 1798 Darmagnac was sent to the Army of Switzerland and in March he served at the action of the bridge of Berne. However, that May he was called to join the Army of the Orient and he embarked with that army on the expedition to Egypt. Once in Egypt, he served at the Battle of the Pyramids where he seized the village of Embabeh. Only a few days after the battle General Bonaparte promoted Darmagnac to chef de brigade of the 32nd of the Line. In 1799 Darmagnac took part in the expedition to Syria and he took part in the Siege of Acre. During that siege he distinguished himself in the attacks on March 30th and May 7th. On May 11th he was badly wounded in the head during the assault of Tour Carrée at Acre. Returning from Syria, in July Darmagnac served at the action of Fort Abukir. Darmagnac remained in Egypt and that November he served under Verdier at Lesbeh, and for his actions he received a sabre of honor. Two years later he served at the Battle of Canope , and a month afterwards he was promoted to général de brigade by General Menou.

In January of 1808 Darmagnac took command of the 1st Brigade of Merle's division in the Corps of Observation of the Western Pyrenees. As the army moved into Spain, the next month he surprised the garrison and took the citadel of Pamplona. That July Darmagnac served at Medina del Rio Seco where he was wounded by a shot in the shoulders but only a few days later he was promoted to général de division. In November he took command of Old Castile and then in January of 1809 he was named governor of Galice. Eight months later in September of 1809 Darmagnac joined the V Corps of the Army of Spain and he took command of the 1st Division. That November he was named governor of New Castile and the Manche. In June of 1810 Darmagnac was authorized to return to France, but by February of 1811 he had returned to Spain as governor of the province of Cuenca. He took command of a division of V Corps in March and then in June he commanded a division in the Army of the Center. That July Darmagnac occupied Cuenca and then in November he seized Belmonte and then won at Tarazone and at Tillagardo. The next month he was placed with the Army of the Reserve in Spain. In May of 1812 Darmagnac was named governor of the province of Talavera and then a year later he took command of a division under Drouet d'Erlon. With this division he served at the Battle of Vitoria in June of 1813. The next month he commanded a division in the corps of the center of the Army of the South and he served at the pass of Maya. As the French fell back, he was pushed back on the Nivelle and then the Nive, and then in December of 1813 he served at Saint-Pierre d'Irube. For the defense of France of 1814, Darmagnac served at Orthez and then at Toulouse .

The restored Bourbons put Darmagnac on non-activity but when Napoleon returned from exile in 1815 for the Hundred Days he placed Darmagnac in charge of the 11th military division at Bordeaux. After Napoleon's second abdication in June of 1815, Darmagnac was again placed on non-activity.