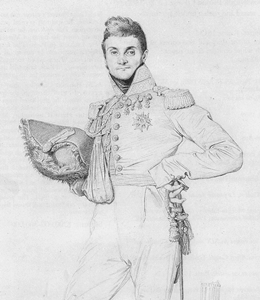 Too young to take part in the Revolution, Louis-Etienne Dulong de Rosnay initially worked as a legal secretary for Mr. Constantin who was a French government administrator serving in Italy. In 1798 or 1799 Dulong became an aide-de-camp to General Cambray and he later took part in an expedition against insurgents of the March of Ancona. In May of 1799, after Dulong was trapped in Ancona when the city was blockaded, Dulong volunteered to join an auxiliary company raised by General Monnier and he was promoted to sergeant in this company. Only a few days later he took part in the affair of Pesaro where he took two artillery pieces and therefore he was promoted to sous-lieutenant on the battlefield. Continuing to serve at Ancona, Dulong took part in a sortie at the end of June where he was wounded by a sabre blow to the knee. That July he was promoted to lieutenant, served at the action of Fano, and decided the victory at the Furlo pass by a charge of cavalry. In August he fought at Montegaleazzo where he was wounded twice, by a blow of a bayonet to the left thigh and a sabre blow to the head. Dulong was again wounded in November, being hit by three shots and having his left arm broken before the conclusion of the siege.

After returning to France, Dulong was promoted to capitaine in the 6th Hussars in March of 1800. He served at the crossing of the Great Saint Bernard pass and then in October he was named provisional commander of Pesaro. Dulong surrendered the city in December when he only had fourteen men fit for duty remaining. Next he rejoined the army and served at the crossing of the Mincio in December where he was again wounded, this time by a bayonet blow to the side. In recognition of his achievements, Dulong was promoted to chef d'escadrons in 1802 and he returned home to recover his health. In May of 1803 he was promoted to chef de bataillon in the 15th Light and then in 1804 he and his men served in garrison at Arras.

When in 1805 the Grande Armée moved east to confront the Third Coalition, Dulong and his men were employed in General Friant's division of III Corps. He took part in the campaign of 1805 and served at the Battle of Austerlitz where he was hit by a shot that broke his right shoulder. Dulong remained with the army and served in the Prussian campaign of 1806 and then in 1807 he served at the Battle of Eylau. In March of 1807 he was appointed major of the 31st Light.

In 1807 Dulong was given provisional command of a regiment that was sent to serve in Portugal. He served in Portugal throughout 1808 and then in January of 1809 he joined the II Corps of the Army of Spain. Four months later in May he was wounded by a shot in the attack of Misarella and then he covered the retreat of the Army of Portugal. Dulong was promoted to colonel of the 63rd of the Line in July, but he was later transferred to command the 31st Light and then the 12th Light. At the end of 1809 he was named a Knight of the Iron Crown. Dulong remained in Spain throughout 1810 and in August of 1811 he served under Godinot before Baza. Next he served at Pozo-Alcon, Pinos, and the action of Motril.

Dulong returned to France in September of 1812 and then as the army was rebuilt he was promoted to général de brigade in April of 1813. The next month he took command of the 3rd Brigade of the 3rd Division of the Young Guard. That July Dulong was named a Baron of the Empire and then in August he served at and was wounded at the Battle of Dresden. He returned to France and in January of 1814 where he commanded the levée en masse of the département of Aube. He was then ordered to command the defense of the chateau of Bicêtre, which he did until April of 1814. After Napoleon's abdication and the restoration of the Bourbons, Dulong continued to serve in the royal army. In March of 1815 he was promoted to lieutenant general and ordered by the king to hold Bethune. Nevertheless, when Napoleon resumed power for the Hundred Days Dulong served him as commander of the National Guard of the 1st military division. After Napoleon's second abdication and Second Restoration, he continued to serve in the army.