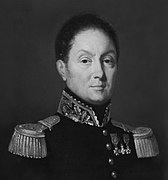 Officer of the Imperial Guard who served at many important battles

The son of a master carpenter, Jean François Flamand enlisted in the French guards in 1785. At the dawn of the French Revolution, on August 30th of 1789 he and his regiment were dismissed. The next day Flamand joined the grenadiers of the Parisian National Guard as a sergeant. In 1793 he was sent to the Army of the Coasts of La Rochelle where he served under Biron and later Chalbos. That October Flamand fought at the affair of Laval where he was wounded by a shot to the right shoulder. Six years later in 1799 he was finally commissioned as a sous-lieutenant in December of 1799. The next month Flamand joined the Grenadiers à Pied of the Consular Guard and he served with the Army of the Reserve later that year, fighting at the Battle of Marengo. In December of 1801 he was promoted to capitaine.

In 1804 Flamand served at the camp of Boulogne and in 1805 he served with the Grande Armée in the confrontation with the Third Coalition. The next year he served against the Fourth Coalition and on October 20th of 1806 he was promoted to chef de bataillon. Flamand went on to serve at the Battle of Eylau in February of 1807 and then the Battle of Friedland in June. In 1808 he was sent to Spain and he was named a Knight of the Empire. The next year Flamand was sent to Germany where he joined the 1st Tirailleurs of the Young Guard. During the War of the Fifth Coalition that year he was promoted to colonel-major of the 2nd Tirailleurs-Grenadiers of the Young Guard and he fought at the Battle of Wagram . In 1810 Flamand was sent back to Spain and in 1811 he was named a Baron of the Empire.

In 1812 Flamand joined the Grande Armée for the campaign against Russia. After surviving the retreat, in April of 1813 he was named colonel-major of the Fusiliers Grenadiers of the Young Guard as part of the 1st Brigade of the 1st Division of the Young Guard. Flamand served on the campaign in Saxony and in June he was named a Commander of the Legion of Honor. In September he was promoted to général de brigade in the Imperial Guard. In November of 1813 Flamand was sent to Antwerp as commander of a brigade of Roguet's 6th Infantry Division of the Young Guard. Serving around Antwerp, in January of 1814 he fought at the combat of Meer and the combat of Winegehem. In February Flamand was wounded by a shot to the left ankle in a sortie from the garrison of Antwerp. After Napoleon's abdication the French leaders finally surrendered the city and Flamand returned to France. For a period of time he served as commander of the depot of the former Imperial Guard at Fontainebleau and then the depot was eliminated and he was put on non-activity. When Napoleon returned from exile in 1815 for the Hundred Days, Flamand supported Napoleon and was named commander at Douai. After Napoleon's second abdication, in July the Count of Olonne arrived to accept the surrender of the city. Flamand refused to open the gates and later that year he retired.