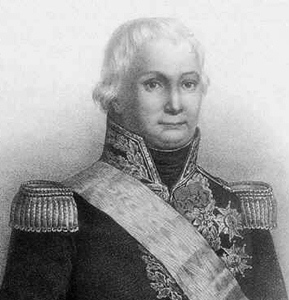 The son of a sailor, Honoré-Joseph-Antoine Ganteaume began his naval career during the summer of 1769 when he began navigating on a merchant ship commanded by his father. Nine years later in 1778 he and his ship Fier Rodrigue were requisitioned to serve in the royal navy. Forming part of Admiral Picquet de la Motte's squadron, Ganteaume and his men escorted a convoy to North America in 1779. After arriving in North America, his ship then fell under the command of the Count d'Estaing. Ganteaume went on to serve during the American Revolutionary War at the combat of Grenada and the Siege of Savannah. In 1782 Ganteaume was transferred to a new ship and he sailed for the East Indies. Once there he served on a frigate for a number of years.

By the time of the Revolution Ganteaume had risen to the rank of sous-lieutenant of vessel. He was commanding a ship of the Company of Indies until he was captured by British ships in 1793. Once he was released that September, Ganteaume was promoted to lieutenant of vessel and he set out on the ship Jupiter. In February of 1794 he received a promotion to captain of vessel and the next month he took command of the ship Mont-Blanc, which he would command for the next three years. Captain Ganteaume joined Admiral Villaret-Joyeuse's fleet in time for the combats on May 29th and June 1st of 1794. During that fighting he received three wounds, including two bad wounds to the feet. Next Ganteaume campaigned off the coasts of Ireland under Admiral Renaudin. In 1795 he sailed to the Mediterranean where he fought a Spanish ship off the coast of Catalonia and then fought near Fréjus. Ganteaume sailed on with a squadron to the Levant where he came to the rescue of Captain Rondeau who was blockaded in the port of Smyrna. While lifting the blockade his ships also captured the British frigate HMS Nemesis.

Near the end of 1797 Captain Ganteaume took command of the frigate Vengeance and he served on the coasts of France. In May of 1798 he was appointed chief of staff to Admiral Brueys for the expedition to Egypt. Taking part in the expedition, Ganteaume was serving at the Battle of Nile where he was wounded, but he managed to escape the flagship Orient on a boat before it exploded. He made his way to Alexandria and then took command of the ship Causse covering the coast of Egypt. Later that year General Bonaparte promoted Ganteaume to rear admiral, and Ganteaume sailed along with the army on the expedition to Syria, assisting at the battles of Jaffa, Acre, Gaza, and Abukir. When Napoleon decided to leave Egypt in August of 1799 and return to France, he selected Ganteaume to captain the ship Muiron to carry them back to France. Ganteaume successfully evaded British ships and carried his passengers to Fréjus.

Once Napoleon had seized power in Paris, Admiral Ganteaume was appointed a member of the naval commission and a councilor of state. In the meantime he was also given command of the fleet at Brest. Serving in the Mediterranean, in January of 1801 he was ordered to carry reinforcements to Egypt. After leaving that month, Ganteaume was forced to return to Brest before his squadron set sail again on January 23rd. In February his fleet captured the British corvette HMS Incendiary, then skirted the coast of Africa and took the cutter HMS Sprightly and the frigate HMS Success. Afterwards, Ganteaume's squadron returned to Toulon and then in March they set sail again, this time to assist in the attack on the isle of Elba and at the siege of Porto-Ferrajo. In May Ganteaume and his squadron set sail for Egypt yet again, this time reaching their destination and arriving in June. However, when they arrived there they found Alexandria blockaded by the British, so he sailed for Benghazi to disembark the reinforcements there. Due to the approach of a British fleet and the hostility of the Arabs, the troops were not disembarked, instead Ganteaume sailed for safety and his squadron captured HMS Swiftsure on June 24th. His squadron finally returned to Toulon at the end of July, having failed to reinforce the troops in Egypt.

In 1802 Admiral Ganteaume was given command of the fleet of Toulon and ordered to sail to Saint-Domingue to resupply the troops there. He successfully did so and returned to France that April. In 1804 Ganteaume was promoted to vice admiral and given command of the naval operations of the army at Brest. Due to the British blockade, the French were unable to cross the English Channel and in 1805 La Grande Armée marched east to deal with the Austrian and Russian threats. In the meantime Ganteaume was awarded the Grand Eagle of the Legion of Honor. In 1808 Ganteaume was placed in charge of all French naval operations in the Mediterranean and he was also ordered to supply Corfu. Having done so, on his return to Toulon he and his ships captured the British frigate HMS Proserpine. Next Ganteaume was appointed inspector general of the coasts and in 1810 he quit his command of the Mediterranean operations. That year he was also named a Count of the Empire and a member of the council of admiralty. Ganteaume briefly served as interim Minister of Marine and then in 1811 he was honored as the colonel commanding the battalion of the Marines of the Guard. In December of 1813, as France was threatened by the Allies he took command of the defense of Toulon.

After Napoleon's abdication in April of 1814, Ganteaume was honored as a Knight of Saint Louis by the restored Bourbons. When Napoleon returned from exile in 1815 and resumed power for the Hundred Days, Ganteaume stayed away from political events. After Napoleon's second abdication, Ganteaume was named a Peer of France by the once again restored Bourbons. He participated in the trial of Marshal Ney where he voted for death.