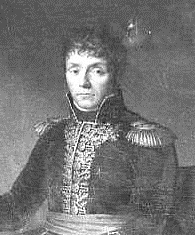 A career soldier, Louis Lemoine first enlisted in the French infantry regiment of Brie in 1783. After the arrival of the Revolution, in 1791 he was dismissed from the army but later that year he rejoined when he was elected lieutenant colonel of the 1st Battalion of Volunteers of Maine-et-Loire. The next year Lemoine was serving at Verdun when General Beaurepaire committed suicide rather than surrender the fortress, and Lemoine took over command. Next he served in Champagne and Belgium and then in September of 1793 he was promoted to général de brigade. At the end of 1793 Lemoine was sent to the Army of the Eastern Pyrenees and after arriving there he was employed in Augereau's division. In May of 1794 he served at the action of Boulou before joining Pérignon's division for a short time. That summer he returned to Augereau's division and then seized Bezalu before evacuating it. In August Lemoine fought at Saint-Laurent de la Mouga where he was wounded six times and afterwards he went on leave.

In early 1795 Lemoine was transferred to the Army of the Coasts of Brest. That July he served at the attacks on the camp of Sainte-Barbe and Fort Penthièvre. January of 1796 saw Lemoine promoted to général de division in the Army of the Coasts of the Ocean and taking command of the departément of Manche. In September he began serving under General Hoche for the expedition to Ireland and after the failed expedition both Lemoine and Hoche went to the Army of the Sambre and Meuse. In April of 1797 Lemoine took command of a division of the advance guard of the army and he served at the crossing of the Rhine at Neuwied. He returned to France in June and then in August he was detached from the army and sent to Paris to assist in the coup d'état of 18 Fructidor that exiled many of the royalists in the government. Next Lemoine took command of the 17th military division at Paris, replacing General Augereau, and then at the end of the year he was employed in the Army of England.

In 1798 Lemoine was sent to Italy to serve with the Army of Rome. In early 1799 he returned to Paris before returning to the Army of Italy in April. Serving under General Pérignon, Lemoine fought at the Battle of Novi in August and afterwards commanded a division under Gouvion St. Cyr. The next month he was serving in the center corps of the Army of Italy, and he went on to fight at Genola, Mondovi, Garessio, and Ormeo. In 1800 Lemoine briefly commanded the second Army of the Reserve in July before quitting the military.

In 1809 General Lemoine returned to the army to take command at Wesel. He remained there until the summer of 1813 when he took command of the 6th Division of II Corps. Lemoine and his men were sent to Minden in August but in October they were forced to take refuge in Magdeburg. Lemoine held out in Magdeburg until after Napoleon's abdication in 1814. When he returned to France he was put on non-activity but also named a Knight of Saint Louis.

When Napoleon escaped from exile in 1815 and resumed power for the Hundred Days, he gave Lemoine command of an infantry division in April. That June Lemoine took command of Mézières and he remained employed after Napoleon's second abdication, eventually retiring in 1816.