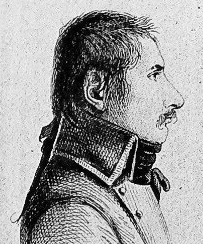 Originally studying to work on bridges and roadways, Louis Alméras entered the army in 1789 after the onset of the Revolution. In November of 1791 he was named a sergeant major in the 5th Battalion of Volunteers of Isère and only two weeks later he was commissioned as a sous-lieutenant. In 1793 Alméras joined the staff of the Army of the Alps briefly before he was promoted to chef de bataillon and sent to the Army of Italy. He next served at the Siege of Toulon before he returned to the Army of the Alps. In 1795 Alméras seized the pass of Monte, was promoted to chef de brigade, and won at at the combat of Argenetera. Two years later he was employed in the 7th military division where he dispersed the revolts of Vaucluse. Alméras was next called to the Army of Italy and then the Army of Rome and he joined Baraguey d'Hilliers division.

In May of 1798 Alméras joined the Army of the Orient and the next month he was named chief of staff of Dumas' cavalry division. He distinguished himself in the assault on Alexandria and then in January of 1799 he was named commander at Damietta. Alméras served at the Battle of Abukir in July of 1799 and then the Battle of Heliopolis in March of 1800. He was wounded the day after Heliopolis as they retook the fort of Belbeis but General Kléber promoted Alméras to général de brigade a few days after the battle. The next month Alméras was again wounded as they retook Boulâq. In August of 1801 Alméras left Egypt with General Belliard to return to France.

After his return to France, Alméras was employed in the Cisalpine Republic in 1802 but then in 1803 he was employed at the isle of Elba. Six years later Alméras returned to the mainland in March of 1809 to join the Army of Italy for the forthcoming campaign against Austria. That April he took command of the 2nd Brigade of Lamarque's 4th Division and then in May he served at the Piave and at Villanova. In July Alméras served at Enzersdorf and then the Battle of Wagram where was wounded badly by two shots. He next returned to Italy where he commanded the département of Serio and he was named a Baron of the Empire in 1810.

For the campaign against Russia of 1812, Alméras commanded a brigade in Broussier's 14th Infantry Division in IV Corps. He served throughout much of the campaign and he fought at the Battle of Borodino where he was wounded. In October Alméras was promoted to général de division but the next month he was taken prisoner during the retreat. Alméras was sent to the Crimea where he remained until August of 1814. Upon his return to France, he was put on non-activity.

When Napoleon returned from exile in 1815 to resume power in March of 1815 for the Hundred Days, at the end of May Napoleon named Alméras commander of La Rochelle and gave him command of an infantry division in the Army of the Loire. After Napoleon's second abdication, the provisional government sent Alméras to Rochefort to hasten Napoleon's departure from France. With the Second Restoration of the Bourbons, Alméras was put on non-activity.