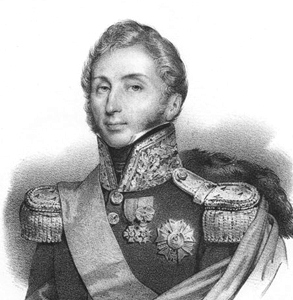 In 1803 General Lamarque joined the camp at Bayonne and then in 1804 he served at the camp at Brest. When in 1805 the Grande Armée marched east to confront the threat of the Third Coalition, Lamarque took command of the 2nd Brigade of Desjardin's division in VII Corps. After participating in the campaign of 1805, the next year he joined the Army of Naples. In June of 1806 Lamarque fought against the guerrilla leader Fra Diavolo and he served at the Siege of Gaeta. Next he seized Camerotta and battled the British at the cape of Licersa. In April of 1807 Lamarque became chief of staff to King Joseph Bonaparte of Naples, and then at the end of the year he was promoted to général de division. In October of 1808 he led an attack on the Isle of Capri, successfully forcing the the surrender of British governor Hudson Lowe, who would later become infamous for his poor treatment of the exiled Napoleon. Next Lamarque became chief of staff to Marshal Murat when Murat arrived in Naples as the new King of Naples, and Lamarque was awarded the Grand Cross of the Order of the Two Sicilies. When Austria declared war in April of 1809, Lamarque was given command of the 2nd Division of the right wing under General Macdonald. That May he fought at Piave, Prewald, and Laibach, and then in July he took part in the fighting at Enzersdorff and the Battle of Wagram .

Lamarque next bounced around various commands, serving briefly in Belgium and Catalonia before returning to Naples to resume the position of chief of staff to Murat in April of 1810. That year he was also named a Baron of the Empire and he served in Calabria, and then in June of 1811 he was sent to Spain to Upper Catalonia to serve as governor. In January of 1812 he led his men in seizing the pass at Ordal and then fighting at Altafulla, and then in November he won at Ametta and served at Casa Massana. Lamarque won a victory at Banolas in June of 1813 and then two months later he participated in lifting the Siege of Tarragona. When forced to abandon Tarragona as the French fell back from Spain, he destroyed Tarragona's fortifications.

After Napoleon's abdication in April of 1814, the restored Bourbons named Lamarque a Knight of Saint Louis but also put him on non-activity. When Napoleon returned from exile and resumed power in 1815 for the Hundred Days, Lamarque was given command of a division but then transferred to take command of the Army of the Loire. With this force he won at Rocheservière against the Royalists in June and then signed the Treaty of Cholet with them, pacifying the Vendée. Nevertheless, Napoleon abdicated later that month after the loss of the Battle of Waterloo and Lamarque was proscribed by the vengeful Bourbons. Lamarque left France and went to Brussels and then Amsterdam, finally returning to France in October of 1818 once he was authorized by the Bourbons.

Starting in 1820, Lamarque began running for an office in the Chamber of Deputies in the hopes of becoming a deputy of the Landes département. Each time he was defeated by other politicians, but in 1828 the incumbent Monsieur du Lyon died. After du Lyon's death, Lamarque successfully defeated all the other challengers and was elected as the representative for the 1st arrondissement of Landes. Once in office, Lamarque sat on the left and in 1830 he signed the Address of the 221 which helped lead to the July Revolution of 1830 and the abdication of King Charles X.

After Louis Philippe took power as king, Lamarque continued to sit on the left and he supported reuniting Belgium with France, the repeal of the treaties of 1815, and the reconstitution of Poland as a nation. He also became known as one of Louis Philippe's chief political opponents. In 1831 Lamarque was rewarded with the Grand Cross of the Legion of Honor and due to his outspoken politics he became known as a defender of the people. His untimely death in 1832 contributed to the riots of June of 1832 that figure in Victor Hugo's Les Misérables.