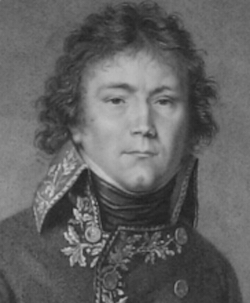 Aide-de-camp to Napoleon who fulfilled a variety of roles

Arc de Triomphe: CAFFARELLI, A. on the south pillar

During the peace that followed, Caffarelli was promoted to général de brigade in May of 1802. From 1803 to 1805 he was officially assigned to the Army of the Coasts. In 1804 Caffarelli was specifically selected to go to Rome to negotiate and escort the Pope to come to France to anoint Napoleon as Emperor of the French. In 1805 he was named governor of the Tuileries and promoted to général de division. When the army marched out to confront the Third Coalition, Caffarelli was named an aide-de-camp to Napoleon. After General Bisson was wounded in November, Caffarelli took command of his division and he served on the left with Marshal Lannes and V Corps at the Battle of Austerlitz in December. Next Caffarelli was named Minister of War of the Kingdom of Italy, he was recognized as a Knight of the Iron Crown, and he was awarded the Grand Eagle of Legion of Honor.

In 1809 Caffarelli was named a Count of the Empire and sent to Spain serve at the Siege of Saragossa. Then in May he was sent back to Italy and employed at Trieste. In September of 1810 Caffarelli was ordered to form and command a division of reserve for the Army of Spain. He served briefly in Biscay and Santander before being sent to Castille in December. That month Caffarelli repulsed the Spanish troops attempting to disembark at Laredo. In June of 1811 he battled the Spanish guerrillas in the valley of Uzama and then in July he took command of Biscay and Navarre. At the start of 1812 Caffarelli took command of a division of the Army of the North under General Dorsenne. That February he was wounded by a shot at the combat near Roncal and then in April he was named commander-in-chief of the Army of the North, a position he took up in May. Caffarelli led his men to join General Souham's forces in October and he led the relief of the Siege of Burgos, pushing back the British troops of Wellington. The next month he returned to Biscay and then he went on to win at Bilbao and Villadiego.

At the start of 1813 Caffarelli was recalled to France to resume his role as aide-de-camp to Napoleon. He was given command of the Imperial Guard troops that remained at Paris and he was named governor of the palace of the empress. When the Empress Marie Louise and Napoleon's son Napoleon II left Paris during the defense of France of 1814, Caffarelli escorted them. After Napoleon's abdication, Caffarelli remained by their side all the way to Vienna. Returning to France, he was named a Knight of Saint Louis but put on non-activity. In January of 1815 he was given command of the 1st subdivision of the 13th military division at Rennes. When Napoleon returned from exile and resumed power without a shot being fired, Caffarelli rallied to him and was again named an aide-de-camp to the Emperor. Caffarelli was put in charge of the 1st military division in June and then in July he was sent on a mission to Metz. Afterwards he joined the Army of the Loire. Caffarelli retired from the army in August.