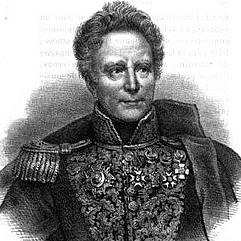 The son of a musician, Victoire Joseph Delcambre joined the 9th Battalion of Volunteers of Nord as a grenadier in September of 1792. Serving with the Army of the North, he was commissioned as a sous-lieutenant in May of 1793. Delcambre served at the affair of Cateau and a night attack near Maubeuge where he was wounded by a shot to the right foot. At the end of 1793 he was transferred to the Army of the Moselle. The first half of 1794 was busy for Delcambre as he served at the combats of Dinant and Neufchâteau and then the Siege of Charleroi and finally in June the Battle of Fleurus . Later that year in October he served at the combat of Nivelles and the Battle of the Roër and in November he was wounded in the left leg by the blast of a shell at the Siege of Maestricht. In September of 1795 Delcambre served at the crossing of the Rhine and then in April of 1796 he was promoted to lieutenant. That August he served at the combats of Sulzbach and at Wolfering. In April of 1797 Delcambre served at the crossing of the Rhine and the Battle of Neuwied and then in October he received a promotion to capitaine. The next year he became an aide-de-camp to General Grenier and he followed Grenier to serve in Italy. In October of 1799 Delcambre was wounded at Centalo and then a week later he served at Genola and was promoted to chef de bataillon on the same day. In 1800 he joined the Army of the Rhine and at the end of the year he took part in the Battle of Hohenlinden.

Delcambre served in Italy from 1805 to 1809. During the War of the Fifth Coalition in 1809 he distinguished himself at the action of the fort of Malborghetto and the Battle of Wagram . After Wagram Delcambre was appointed colonel of the 23rd Light and named a Knight of the Iron Crown. In 1810 he was named Baron of Champvert and he served in Valias before joining the Army of Catalonia. Now serving in Spain, Delcambre served under Baraguey d'Hilliers at the combat before Figuières in May of 1811 and then the Siege of Figuières. In 1812 he served at Altafulla, Mataro, Casa Massana, the pass of Sainte-Christine, and Mont Serrat.

In January of 1813 Delcambre was recalled to France and named colonel-major of the 5th Voltigeurs of the Young Guard. He served during the campaign in Saxony and in July he was promoted to général de brigade commanding a brigade in Thiébault's 40th Division in Marshal Davout's XIII Corps. Delcambre served under Davout for the remainder of the war as Davout and his troops were besieged in Hamburg. After news of Napoleon's abdication was confirmed in 1814, Delcambre was selected to return to Louis XVIII in Paris and show XIII Corps' loyalty. The restored Bourbons named Delcambre a Knight of Saint Louis but also put him on non-activity. In 1815 during the Hundred Days Delcambre was appointed chief of staff of Drouet d'Erlon's I Corps in the Army of the North and he served at the Battle of Waterloo.