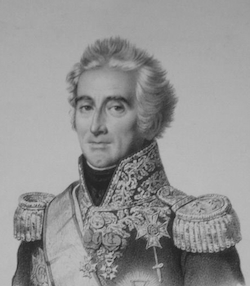 General who served as a chief of staff to General Moreau, Prince Eugene, and Marshal Masséna

A career soldier, François-Nicolas Fririon first enlisted in the Artois infantry regiment in 1782. After the onset of the Revolution, he was named quartermaster treasurer of his regiment and commissioned a lieutenant. Fririon served with the Army of the Rhine and in September of 1793 he was promoted to capitaine. A month later he served in the defense of the lines of Wissembourg. In October of 1794 Fririon was promoted to chef de bataillon and then he later went on to serve at Mannheim and Ansawer over the next year. March of 1797 saw Fririon promoted to chef de brigade and then in 1797 and 1798 he served in the Army of Germany, Army of Switzerland, and Army of Mainz.

In November of 1798 Fririon went to the Army of Italy to become General Hatry's chief of staff. The following April he served at Verona and then commanded the rear guard. In June of 1799 Fririon was named deputy chief of staff to General Moreau and then next year he was promoted to général de brigade. He remained as deputy chief of staff to Moreau and the Army of the Rhine and he therefore served at the Battle of Hohenlinden in December of 1800. Afterwards, Fririon was named commander of Salzburg and then in 1802 he was named commander of the département of Bas-Rhin.

In 1805 when the Grande Armée moved east to deal with the dual threats of Austria and Russia, Fririon was sent to Italy to become Marshal Masséna's deputy chief of staff. He served at the crossing of the Adige during the Battle of Caldiero and then later at the crossing of the Tagliamento. In December Fririon joined Prince Eugene's staff and he took part in the blockade of Venice. Afterwards, he was named chief of staff to Prince Eugene the Viceroy in Italy. During this time Fririon also commanded a brigade of General Boudet's division.

In late 1806 Boudet's division with Fririon's brigade was called to the VIII Corps of the Grande Armée and in June of 1807 his unit served in Pomerania. Fririon took part in the sieges of Colberg and Stralsund and then in October he joined the I Corps. He next went on to seize the fort of Dannholm on the isle of Rügen and then take Rügen at the end of the year. Fririon occupied Brême and then was sent to Zealand in Denmark to command the six Spanish battalions stationed there. When his Spanish troops turned on the French and massacred them in a surprise in July of 1808, Fririon escaped being killed by wearing the uniform of a Danish captain. Afterwards he was employed in the Hanseatic cities.

Fririon took an active command again in the spring of 1809 when he again resumed command of the 1st Brigade of Boudet's division. Taking part in the Danube campaign against Austria, he defended Essling during the hard fought Battle of Aspern-Essling . When General Beker was relieved of command for negative remarks about Napoleon, Fririon took up Beker's former position as chief of staff to Marshal Masséna. He took part in the second crossing of the Danube and then the Battle of Wagram and the Battle of Znaim. After the conclusion of the campaign, Fririon was promoted to général de division. The next year he was recognized as a Baron of the Empire and in the meantime he also received the Grand Cross of the Order of Dannebrog and the Grand Cross of the Epée of Sweden.

Fririon next followed Marshal Masséna to the Spanish peninsula, continuing his duties as chief of staff to Masséna. In May of 1811 he served at Fuentes de Onoro and then the next month he took part in relieving the Siege of Badajoz. Fririon returned to France to recover his health in September of 1811. In 1812 he was appointed inspector general of infantry of the 1st military located at Paris. He remained at Paris for the remainder of his career under Napoleon, including during the Hundred Days of 1815.