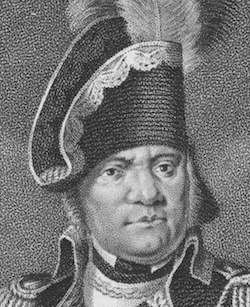 Originally from Belgium, Pierre-Jacques Osten took part in the uprising of the Low Countries against Austrian rule in November of 1789. As a sous-lieutenant in the 1st Chasseurs of Namur he served in the Army of Brabant under Vandermesch and then he was promoted to capitaine in 1790. After the Austrians defeated the uprising, in 1792 Osten took refuge in France where he was welcomed and allowed to join the Army of the North under Marshal Luckner. That August he was named a lieutenant colonel of Belgian chasseurs in the service of France and his battalion was designated to serve in Rosières division. Osten and his men saw action before long, seizing Pont Rouge, Warneton, Comines and Werwicq. In October he took Quesnoy-sur-Deûle and retook Pont Rouge, and then in November he retook Werwicq and was victorious at Warneton. Later that year he served at the action of Antwerp.

In January of 1793 Osten was named colonel and commander of the troops of Flanders. That March he served under Bernron in Holland and participated in the action of Klundert and the bombardment of Willelmstadt. During the retreat from Holland, Osten commanded the rear guard. Once back in France, Osten was named a chef de brigade of the Belgian Chasseurs under Rosières in the Army of the North again. That October the representatives of the people with the Army of the North promoted Osten to général de brigade. Osten was next employed in the camp of Madeleine, and then in April of 1794 he commanded the camp of Mons. In May of 1794 he took part in the Battle of Tourcoing where he led the right wing as part of Bonnaud's division. Afterwards Osten marched on the Ath and invested Condé and Valenciennes and seized Anzin before he rejoined the Army of the North. That September he was assigned to Delmas' division and he covered the siege of Bois-le-Duc, driving back the enemies who attempted to relieve the siege. In October Osten crossed the Meuse and then in November he threatened Fort Saint-André, and he finished the year serving at the action of the isle of Bommel.

In 1795 Osten took part in the conquest of Holland by French forces and he took the surrender of the cities of Gorcum, Lowestein, and Worcum. That June he was named commander of Breda and then in October he was given command of the isle of Walcheren. Osten remained in this position for the next few years, and then in August of 1799 he joined Desjardin's division in the Army of Holland.

Once peace was obtained and the political structure was reorganized, Osten was employed in the Batavian Republic. In 1803 he returned to France to train at the camp of Compiègne and in 1804 he was named a Commander of the Legion of Honor. Osten returned to Holland in 1805 and then in 1806 he was named commander of Flessingue and the isle of Walcheren. He remained in this post without significant troubles until the British expedition to Walcheren in July of 1809. Osten used the resources at his disposal and attempted to repulse the disembarkment of British troops on the isle but he and his men couldn't hold them back. He next attempted to defend Flessingue but in August he was wounded during the defense. Osten was taken as a prisoner of war and transported back to England.

In February of 1810 Osten escaped from England in a boat and made his way back to the coast of France. In response, he was tried in absentia by British courts for having violated parole and found guilty. To avoid further entanglements with the British, Osten was sent to the Army of Illyria in September of 1810 where he was named chief of staff. In 1811 he was named commander of the 1st Brigade of the minor German princes at Hamburg under General Carra St. Cyr. That November Osten was employed in the 17th military division and named commander of the département of Yssel-Supérieur. In 1812 he served in Marshal Augereau's XI Corps guarding the coasts.

For the campaigns in Germany of 1813, General Osten was initially ordered to serve under General Vandamme. Marshal Davout then gave him command of the advance guard of Carra-Saint-Cyr's division and at the end of May he was named commander of the city of Hamburg. After Marshal Davout took command at Hamburg later that year, Osten was ordered by Davout to command the troops detached to defend the isle of Wilhelmsburg. In February of 1814 Osten was defending this position when he was badly wounded, and he died three weeks later from these wounds.