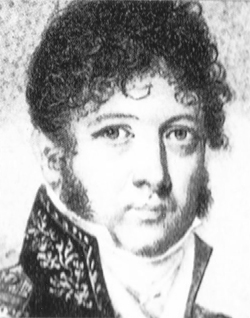 Originally from Savoy, Michel-Marie Pacthod first entered the military in 1786 when he joined the guard of the corps of the king of Sardinia. In the next few years he took a training course of law at Chambéry and then became a military auditor at Carouge. After the king of Sardinia abandoned Savoy in 1792, Pacthod rallied to the French Revolution. He was named capitaine of a free company of the newly formed département of Mont Blanc, which was created from the former territory of Savoy. Pacthod immediately went to work, serving in the Army of the Alps and then in April of 1793 taking command of the 2nd Battalion of Volunteers of Mont Blanc. The next month he was elected lieutenant colonel and then later that year he served under Carteaux at the Siege of Lyon. Next Pacthod was sent to the Siege of Toulon where he received seven wounds one day while defending the redoubt of Sablettes.

In January of 1794 Pacthod was promoted to chef de brigade by the representatives of the people with the Army of Italy. Two weeks later he took an indefinite leave to recover from his wounds. By January of 1795 Pacthod was well enough to return to duty and he was named deputy chief of staff for the expedition to Corsica. That May he was put in charge of fighting the insurgents of Toulon and Marseille and then promoted to général de brigade. The next year Pacthod was with the Army of the Alps and he served in Vaubois' division. In May of 1797 he ceased his command and then later that year he was sent to the Army of the Rhine and Moselle. Pacthod took command at Landau and then in 1798 he was made commander at Strasbourg. The following year he joined the Army of Holland and served at Alkmaar and Castricum .

In 1803 General Pacthod was placed under Mortier in the camp of Nimègue. When the Grande Armée marched out to confront the Third Coalition in 1805, he took command of the 1st Brigade of Rivaud's division under Marshal Bernadotte, serving throughout the campaign. During the campaign against Prussia the next year, Pacthod served at Halle in October and then at Crivitz and Lübeck in November. Continuing to fight, in January of 1807 he was driven out of Liebstadt and then wounded by grapeshot to the left hip at Mohrungen. The next month he took command of the 1st Brigade of the 2nd Division of I Corps and the following summer he fought at the Battle of Friedland.

For his service, Pacthod was rewarded by being created a Baron of the Empire in 1808. Later that year he was sent to Spain as commander of the 1st Brigade of the 3rd Division of I Corps. He served at Durango and distinguished himself at Espinosa, receiving a promotion to général de division a week later. In December Pacthod served at Madrid and then the next month he fought at the Battle of Uclès. He returned to Paris in March of 1809 but he was then sent to the Army of Italy. After arriving in Italy, Pacthod took command of the 4th Division and served as part of Grouchy's corps. Participating in the campaign against the Austrians, he served at the battles of Raab and Wagram . In 1810 Pacthod was rewarded as a Knight of the Iron Crown and then given a division in the Army of Naples.

1812 saw General Pacthod traveling to Ragusa to take command of the 2nd Division of the Army of Illyria. While there, he notably stopped an insurrection from beginning. In 1813 Pacthod took command of a division in Italy before being sent to Germany in April to command the 13th Infantry Division. Campaigning in Saxony, Pacthod fought at Bautzen and was named a Count of the Empire. A week after Bautzen he took 8000 Prussians prisoner at Hoyerswerda and then two months later he was named a Grand Officer of the Legion of Honor. That September Pacthod fought at Dennewitz and then at the end of the month he took command of the 1st Division of the Young Guard. As the army fell back at the end of October, Pacthod was wounded in the shoulder at the bridge of Sachsenhausen.

Taking part in the defense of France, Pacthod commanded a division of the National Guard formed in Champagne. In February of 1814 he served at Montereau and Bar-sur-Aube. The next month he was leading a supply convoy of National Guard troops to Fère-Champenoise when he and his men were attacked as part of the Battle of Fère-Champenoise. Woefully outnumbered, his men formed square and tried to escape while making a fighting withdrawal. This went on for six hours and Pacthod was wounded in the fighting but he refused requests to surrender while the enemy was still firing. As they ran out of ammunition Pacthod finally surrendered, and their defiant fight and heroic resistance impressed the Tsar of Russia. After the battle, a French girl was found hiding who explained that her mother was dead and her father was in the National Guard but had just been killed. Pacthod agreed to take charge of the girl and raise her.1

After Napoleon's abdication, Pacthod was released by the Russians to return to France. Once back in France, the Bourbons gave him command of the 4th military division and made him a Knight of Saint Louis. When Napoleon returned from exile in 1815, he selected Pacthod to command the 2nd Infantry Division in the Army of the Alps. However, Pacthod declined the command for reasons of health and did not participate in the Hundred Days. In 1816 he was finally naturalized as a French citizen and he continued his military career until retiring in 1826.