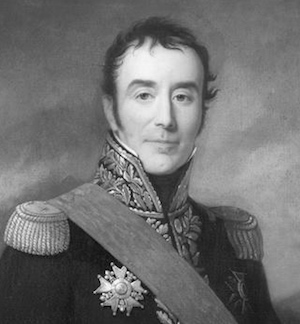 The son of a secretary of the king and seneschal of Montpellier, Jacquies David Martin de Campredon entered the engineering school of Mézieres as a sous-lieutenant in January of 1782. Three years later he was promoted to lieutenant and in 1790 he married the sister of another engineering soldier, Poitevin de Maureillan. In April of 1791 Campredon was promoted to capitaine and over the next few years he served as the aide-de-camp to General Légier, General Beylié, and General Servan. In May of 1793 he served at Sète by order of the representatives of the people and in October of 1794 he became a teacher at the central school of public works. In October of 1795 Campredon was promoted to chef de bataillon and named deputy director of fortifications.

In 1805 Campredon was back in France and he took command of the engineers at the camp of Saint-Omer. That August he commanded the engineers at Mantua and then in 1806 he took command of the engineers of the Army of Naples. Campredon directed the Siege of Gaeta and afterwards he received a letter of congratulations written by General Berthier in the name of the Emperor Napoleon. A month after the siege was completed, he was promoted to général de division of engineers and then he passed into Neapolitan service while continuing to command the engineers of the French army stationed in Naples. In 1808 Campredon was named a Grand Dignitary of the Order of Two Sicilies and in 1809 he became Minister of War of the Kingdom of Naples.

In 1812 Campredon was recalled to French service for the campaign against Russia. He took command of the engineers of Marshal Macdonald's X Corps and he directed the Siege of Riga. After the retreat from Russia, Campredon was named commander of the engineers at Danzig. In 1813 Danzig was besieged by the Russians and that October Campredon was wounded while defending the city. When the city finally surrendered he was taken prisoner.

After Napoleon's abdication in April of 1814, Campredon returned to France. The restored Bourbons treated Campredon well, naming him a Knight of Military Merit, inspector general of engineers, a Grand Officer of the Legion of Honor, and a Baron.