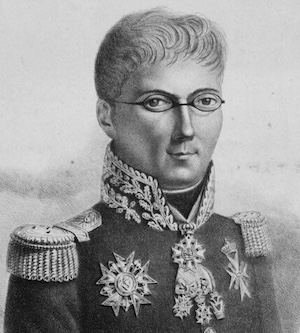 General of engineers who served in Austria, Dalmatia, and Russia

The son of a physicist and astronomer, Jean Étienne Casimir de Poitevin entered the engineering school of Mézières as a sous-lieutenant in February of 1792. Before the end of year he was serving with the army at the sieges of Namur and Fort Villatte. In February of 1793 Poitevin served at the bombardment of Maestricht and he received a promotion to lieutenant. The next month he served at the Battle of Neerwinden and then in June he was promoted to capitaine. Poitevin went on to serve at the action of Menin, the combat of Courtrai, the Siege of Ypres, the Siege of Nieuport, the attack on the isle of Cadzand, and the Siege of Fort Ecluse. In August of 1794 he was promoted to chef de bataillon and that October he directed the Siege of Venloo. At the end of the year Poitevin served at the Siege of Nimègue. In 1795 he served with the Army of the Sambre and Meuse and that September he served at the crossing of the Rhine at Dusseldorf. The next year Poitevin served with the Army of the Rhine and that October he fought at Biberach before being placed in charge of the bridgehead at Huningue.

In 1797 Poitevin was promoted to chef de brigade and in 1798 he was assigned to the Army of the Orient to serve under Caffarelli. In November of that year he was returning to France when when his ship was attacked by a corsair from Tripoli and Poitevin was taken prisoner. Poitevin was robbed and sent as a prisoner to Ali Pasha in Albania before then being sent to Constantinople. During his captivity he was named deputy director of fortifications and he was finally released in August of 1801. Back in France Poitevin was named director of fortifications.

At the end of 1803 Poitevin was employed in Îles de Saintes in the Antilles and later he took part in the expedition to the island of Dominica and during that expedition he served at the action of the city of Roseau. Returning to France, Poitevin took command of the engineers of Marshal Soult's IV Corps for the campaign of 1805. After the conclusion of the campaign, on Christmas Day he was promoted to général de brigade. The treaty signed after the Battle of Austerlitz granted Dalmatia to France, and Poitevin was sent there in February of 1806. He organized the fortifications at Zara and then that August he was named commander-in-chief of the engineers of the Army of Dalmatia. In 1808 Poitevin was named inspector general of fortifications and Baron of Maureilhan. When General Marmont left Dalmatia in 1809 leading the Army of Dalmatia to support Napoleon in the War of the Fifth Coalition, Poitevin was left in charge as governor of the Illyrian Provinces. In 1810 Poitevin led the engineers in the inspections of Trieste and Zara and then in September he was recalled to France. In 1811 he he served at Brest and Port-Louis in a similar capacity.

For the Russian campaign of 1812, Poitevin was placed in charge of the engineers of Prince Eugene's IV Corps. In August he replaced Dode de la Brunerie in command of the engineers of Marshal Ney's III Corps. Poitevin served at the Battle of Borodino and then in December of 1812 he was named governor of Thorn. He surrendered Thorn in April of 1813 but he was allowed to return to France due to the terms of the surrender. In September Poitevin commanded the engineers of the 17th and 31st military division, in November he ordered the inspection of Bréda, Berg op Zoom, and Wilhelmstadt, and in December he ordered the inspection of Bois-le-Duc, Grave, Venloo, and Maestricht. Next Poitevin took command of the engineers of General Maison's I Corps.

After Napoleon's abdication and the Bourbon Restoration, Poitevin was promoted to lieutenant general and named a Knight of the Order of Military Merit. When Napoleon returned in 1815 for the Hundred Days, Poitevin was placed in charge of the engineers of the Army of the Rhine under General Rapp. After Napoleon's second abdication, he continued a successful career as an engineer in the army.