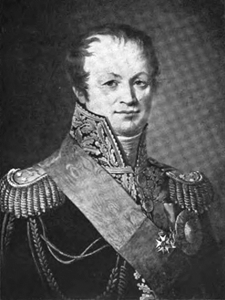 Chief of staff to Prince Eugene in Italy for many years

Henri-François-Marie Charpentier first joined the army in August of 1791 when he volunteered to join the 1st Battalion of National Volunteers of Aisne and was elected a capitaine. The next year he and his unit served in the Army of the North, and then in 1793 he served at the defense of Maubeuge. In February of 1794 Charpentier received a promotion to chef de brigade and then two months later he was appointed the chief of staff to General Desjardin. That autumn he served at the siege of Luxembourg under Hatry where he would remain until the successful conclusion of the siege in June of 1795. Next Charpentier served with the Army of the Sambre and Meuse until September of 1796 when he was assigned to the 17th military division.

Charpentier remained as Eugene's chief of staff for the campaign against Russia of 1812. That August he was named governor of the provinces at Witepsk, and then during the retreat as the army broke down and was reorganized he became the chief of staff to Marshal Davout.

Having survived the retreat, in 1813 Charpentier was given command of the 36th Infantry Division of Marshal Macdonald's XI Corps for the campaigns in Germany. That May he fought at Lutzen, Bischofswerda, and Bautzen. Three months later Charpentier fought at the Battle of Katzbach where he energetically defended the crossing of the Bober, and then in October he fought at Wachau, Leipzig , and Hanau. The following month Charpentier provisionally took over command of XI Corps from Marshal Macdonald and was awarded the Grand Cross of the Order of the Reunion.

Charpentier returned to Paris for the defense of France of 1814. That February he took command of the 7th Division of the Young Guard and he was sent to Fontainebleau where he repulsed the cossacks. The next month Charpentier served at Craonne, Laon, Fère-Champenoise, and Paris before Napoleon's abdication in April.

The restored Bourbons made Charpentier a Knight of Saint Louis and Grand Officer of the Legion of Honor. Furthermore, he was appointed to a commission to reform the military penal code. When Napoleon escaped from exile in 1815 for the Hundred Days, Charpentier rallied to him and was named commander of the 12th military division. After Napoleon's second abdication, the Bourbons put Charpentier on non-activity before exiling him to Switzerland.