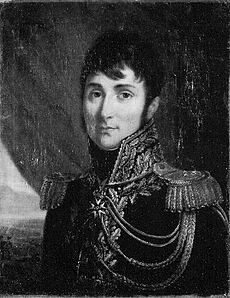 An artillery officer, Jean-Jacques Desvaux de Saint-Maurice first enrolled in the artillery school of Châlons in March of 1792. Six months later he graduated as a lieutenant in the 4th Foot Artillery and he was sent to the Army of the Alps. Desvaux fought at Aiguebelle and Saint-Maurice before receiving a promotion to capitaine in September of 1793. He next served at the Siege of Lyon before being posted to the Army of the Eastern Pyrenees where he fought at Saint-Elme in May of 1794.

In early 1796 Desvaux became an aide-de-camp to General Saint-Rémy, and then at the end of 1797 he joined the 2nd Horse Artillery. He was next sent to the Army of Italy, and in 1799 he saw action and protected Sérurier's retreat on the Adige. A promotion to chef d'escadrons arrived in April of 1799, and Desvaux went on to serve at San-Giuliano and Novi . The next year he served in the Army of the Reserve and the Army of Italy before joining the 8th Horse Artillery in November. As negotiations broke down, Desvaux served at the crossing of the Mincio, then at San-Michele and Treviso before peace was finally signed.

During the years of peace that followed, Desvaux became an aide-de-camp to General Marmont. In 1803 he was promoted to colonel of the 6th Horse Artillery, but he also remained as an aide-de-camp to Marmont. When war broke out in 1805, Desvaux was serving as Marmont's aide but also commanding the 1st Foot Artillery. He participated in the campaign that year and served at Ulm before he was taken prisoner in the fighting at Judenburg in November. However, the Army of Italy was able to secure his release.

In 1810 General Desvaux was tasked with inspecting the artillery of the isle of Aix and later that year he became a Baron of the Empire. For the Russian campaign of 1812, he commanded the Horse Artillery of the Guard under Marshal Bessières, and he continued in this position for the campaigns in Saxony of 1813. During those campaigns he served at Lutzen, Bautzen, and Hanau, and in the meantime he was named a Commander of the Legion of Honor. Desvaux also received a promotion to général de division in November of 1813. For the defense of France in 1814, he commanded the artillery of the Army of Lyon.

After Napoleon's abdication, Desvaux was made a Knight of Saint Louis but also put on non-activity. When Napoleon escaped in 1815 for the Hundred Days, Desvaux rallied to him and was named commander-in-chief of the Artillery of the Imperial Guard. He took part in the campaign in Belgium that June and fought at Waterloo where he was killed.