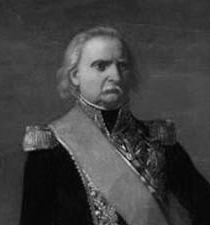 Enlisting in the Royal-Marine regiment in 1783, François Xavier Donzelot then served in garrison in Corsica. After the Revolution was well underway, in September of 1792 he was serving with the Army of Belgium and he was commissioned as a sous-lieutenant in the 21st Cavalry. The following March Donzelot served at the Battle of Neerwinden under Champmorin and a week later he was promoted to lieutenant. Another promotion followed less than two months later when he was promoted to chef de bataillon in May. At the end of 1793 Donzelot was employed with the Army of the Rhine and then in March of 1794 he joined the Army of the North. Less than three months later he was promoted to chef de brigade and then in 1795 he returned to the Army of the Rhine. That October Donzelot was wounded defending the bridge of Huningue. In 1796 he fought at the Battle of Neresheim where he served as chief of staff to General Duhesme.

In May of 1798 Donzelot was named chief of staff to Desaix's division in the Army of the Orient. After they arrived in Egypt, in October he served at Sediman. In May of 1799 he served at Kosseir and then in June he was promoted to général de brigade by General Bonaparte. That August Donzelot repulsed the British who came from the Red Sea at Kosseir. In March of 1800 he distinguished himself at the Battle of Héliopolis in Friant's division. Afterwards Donzelot was sent to help put down the revolts at Cairo. In 1801 he served under Belliard and in June he signed the surrender of Cairo despite personally opposing it.

Returned to France, Donzelot was employed in the Ministry of War. He became General Augereau's chief of staff and he served as chief of staff to Augereau's VII Corps in 1805 when the Grande Armée marched out to face the Third Coalition. In 1806 Donzelot was sent to the Army of Naples and he served at the Siege of Gaeta. In 1807 he was named commander in second of the Corps of Occupation of Corfu and that December he was promoted to général de division. In March of 1808 Donzelot replaced Cèsar Berthier as governor of the Ionian Isles. He remained in this post for the next six years until the end of Napoleon's rule in 1814.

Back in France, Donzelot was recognized as a Knight of Saint Louis and Grand Officer of the Legion of Honor. He commanded a subdivision of a military division until Napoleon's return to power for the Hundred Days. Napoleon gave Donzelot command of the 2nd Infantry Division of Drouet d'Erlon's I Corps in the Army of Belgium. Donzelot fought at the Battle of Waterloo and afterwards he briefly served as chief of staff of the Army of the Loire. He was put on non-activity but in 1817 he was appointed governor general of Martinique and in 1818 he took up that position.