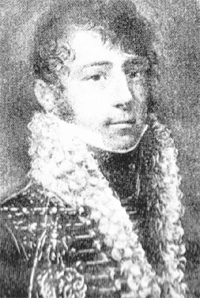 Alexandre-Louis-Robert Girardin d'Ermenonville was the son of the Marquis René-Louis de Girardin who had been a friend and supporter of the philosopher and writer Jean-Jacques Rousseau. In 1787 the young Alexandre Girardin was sent by the king to the school at Vannes and then three years later he joined the navy. In 1790 he served on the corvette La Sincère and the vessel La Victoire and then for the next two years he served on the vessel L'Eole. Fighting at Saint-Domingue in 1792, he was wounded by a ball to the leg and he returned to France.

Once back in France, Girardin decided to join the cavalry and he became a sous-lieutenant in the 3rd Hussars in December of 1792. A few months later he transferred to the 18th Dragoons, but before long the Revolution caught up to him. Girardin was arrested and imprisoned in L'Abbaye for being a noble but finally released.

1805 started with Captain Girardin as an officer in the 23rd Chasseurs à Cheval. He served on campaign that year as an aide-de-camp to Marshal Berthier and fought at Austerlitz. The following year he continued to serve as an aide-de-camp to Berthier until December when he was promoted to chef d'escadrons. Next he took a position with the 8th Dragoons in Milhaud's dragoon division and was wounded by a saber blow while serving in Poland near Willenberg. In the summer of 1807, he fought at Friedland where he was wounded by a ball.

Girardin served some time in Spain, being wounded by a saber blow to the head near Sahagun. In 1809 he followed Berthier to Germany as an aide-de-camp and participated in the Danube campaign of that year. The next year Girardin was rewarded as a Count of the Empire, and then in 1811 he was promoted to général de brigade. For the Russian campaign of 1812, General Girardin was employed in the staff of the Grande Armée. He fought at Ostrowno that July, and then after the retreat he served in Saxony in 1813. In 1814 Girardin served in the defense of France, fighting at Champaubert and being promoted to général de division on the same day.

After Napoleon's abdication, Girardin was rewarded by the Bourbons as a Knight of Saint Louis and given a command in the 1st military division. Nevertheless, when Napoleon returned for the Hundred Days he rallied to Napoleon. Girardin took a position with the Army of the North, becoming the chief of staff of the cavalry commanded by Marshal Grouchy in the right wing of the army. He served in the campaign in Belgium but did not appear to suffer consequences for this when the Bourbons returned.