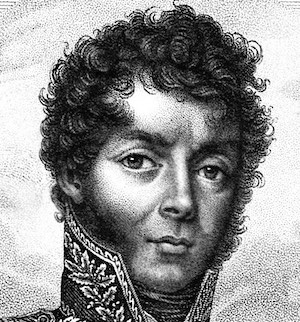 General-de-brigade and aide-de-camp to Prince Borghese, the husband of Pauline Bonaparte

Joining the army as a capitaine in the 6th Battalion of Haute-Saône in August of 1792, Antoine Gruyer was sent to serve in the Army of the Rhine. In 1794 he fought at the Battle of Fleurus where he was wounded by a shot to the right foot. Once the army was reorganized a few days later, Gruyer joined the Army of the Sambre and Meuse. In 1796 he served with the 34th demi-brigade of the line and then in 1797 he served in Italy. That March Gruyer fought at the action of the fort of Chiusa. The next year he was designated for the Army of England and then in 1800 he was promoted to chef de bataillon and he joined the Army of Italy. In December of 1800 Gruyer served at Pozzolo and then a week later he served under General Suchet at the attack of Verona.

During the peace that followed, Gruyer was sent to train at the camp of Saint-Omer. When in 1805 the Grande Armée marched east to confront the Third Coalition, Gruyer served with Marshal Soult's IV Corps. He fought at the Battle of Austerlitz where he was badly wounded. In 1806 Gruyer gained the honor of joining the Chasseurs à Pied of the Imperial Guard. With the Imperial Guard he served in Prussia and Poland in 1806 and 1807. In 1808 Gruyer was promoted to colonel and he became the premier aide-de-camp of Prince Borghese, the husband of Pauline Bonaparte.

Gruyer returned to serving directly with the French army in February of 1813 when he was promoted to général de brigade and then sent to Saxony. He served at the Battle of Lützen in May and then in July he took command of the 1st Brigade of Guilleminot's 14th Division in the XII Corps. That September Gruyer distinguished himself during the Battle of Dennewitz. Later his command became the 1st Brigade of Guilleminot's 13th Division in VII Corps. In October Gruyer seized the bridge and city of Dessau and he was named a Commander of the Legion of Honor. At the end of the year he joined the IV Corps and returned to Paris. For the defense of France of 1814, Gruyer returned to Langres where he commanded the département of Haute-Saône. In February he took command of the 1st Brigade of the 9th Infantry Division in Marshal Oudinot's VII Corps when General Gauthier was wounded. Less than a week later Gruyer served at Méry-sur-Seine where his right arm was broken.

After the abdication of Napoleon and the restoration of the Bourbons in 1814, Gruyer was maintained in his command of the département of Haute-Saône and named a Knight of Saint Louis. Nevertheless, when Napoleon returned from exile in 1815, Gruyer alongside Marshal Ney rallied to Napoleon. With Napoleon back in power, Gruyer was supposed to represent Haute-Saône in the Chamber of the Hundred Days, but instead he was called to the Army of the North. He was named a Baron of the Empire but then after Napoleon's second abdication Gruyer was proscribed in the ordonnance of July 24th, 1815. Gruyer was arrested at Lure at the end of December of 1815 and then he was sent to Strasbourg to be judged. In May of 1816 the 1st Council of War at Strasbourg condemned Gruyer to die but two days later his sentence was commuted to 20 years of detention by royal order. Gruyer served his sentence at Strasbourg and his wife was allowed to live with him, but the commander of the prison treated them harshly, refusing to seek a doctor when necessary. In February of 1818 the Duke of Angoulême requested that Gruyer be freed, and the next day Gruyer was released.