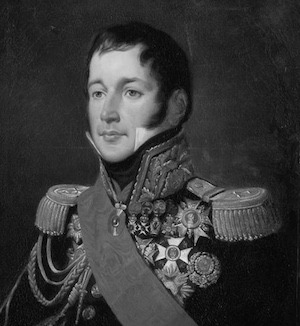 Beginning his military career at the onset of the Revolution, Armand Charles Guilleminot volunteered to join the 9th Battalion of the National Guard of Dunkirk in July of 1789. The next year he took part in the Brabant Revolution in Belgium but after the Austrians reasserted control over the area he took refuge in France. In July of 1792 Guilleminot was elected a sous-lieutenant in the 4th Battalion of Volunteers of Nord. Serving with the Army of the North, he was attached to the staff of the army and served under Dumouriez. In 1794 at the Battle of Tourcoing Guilleminot temporarily served as an aide-de-camp to General Souham. Later that year he joined the Army of the Sambre and Meuse and in 1796 he was promoted to lieutenant. Another promotion, this time to capitaine, followed in 1797 and in 1798 Guilleminot served in the Army of Mainz before joining the Army of Italy at the end of the year. In March of 1799 he fought at the battle near Verona and he was promoted to chef de bataillon on the battlefield by the French commander General Schérer. At the end of 1799 Guilleminot became an aide-de-camp to General Moreau and he served with the Army of the Rhine in 1800 and 1801.

In 1802 Guilleminot was attached to the depot of war and employed in the cartography service. In 1805 he served in the staff of the historical and geographic service. The next year Guilleminot was sent on a secret mission to Dresden in September and then in October he joined the Grande Armée as part of Marshal Berthier's staff. Once the War of the Fourth Coalition was concluded in July of 1807, Guilleminot was sent to Turkey to notify the Ottoman Empire of the Treaty of Tilsit signed between France and Russia.

In 1808 Guilleminot was first sent to Bayonne and then in June he became chief of staff of Marshal Bessieères in Spain. That July he served at the Battle of Medina del Rio Seco and less than a week later he was promoted to général de brigade. In October Guilleminot was named a Baron of the Empire and he became chief of staff of Marshal Soult's II Corps. In March of 1809 he joined the Army of Germany as chief of the topography service and he worked directly with Marshal Berthier during the Danube campaign. In 1810 Guilleminot was named chief of staff of the Army of Catalonia and in the meantime he was recognized as a Commander of the Iron Crown and a Knight of the Order of Maximilien Joseph of Bavaria.

In 1811 Guilleminot joined Berthier's staff again and he remained with Berthier until August of 1812 when he became chief of staff to Prince Eugene's IV Corps. He fought at and was wounded at the Battle of Borodino in September and then at the Battle of Maloyaroslavetz he took over Delzons' division when Delzons was killed. Guilleminot remained in command of the division and in November he fought at Wiazma and Krasnoe. After surviving the retreat, in February of 1813 he was employed in the staff again and was placed in charge of topography. In May Guilleminot was promoted to général de division and in July he took command of the 14th Infantry Division in Marshal Oudinot's XII Corps. That August he served at Gross-Beeren and in September he served at Dennewitz. Next Guilleminot took command of the 13th Division and he briefly served in VII Corps before joining IV Corps. In October he and his men served at the Battle of Hanau. For the defense of France of 1814, Guilleminot took part in the defense of Mainz.

After Napoleon's abdication and the Bourbon Restoration, Guilleminot was named a Knight of Saint Louis. Napoleon escaped exile and resumed power in 1815 without a shot being fired, and Guilleminot was then named commander in second of Jérôme Bonaparte's division. With this division he fought at the Battle of Waterloo against Hougoumont. After Napoleon's second abdication, Guilleminot was ordered to negotiate the surrender of Paris to Marshal Blücher and he was held prisoner by the Prussians until the negotiations were complete. In 1823 Guilleminot served on the expedition to Spain and he later served as ambassador to Constantinople.