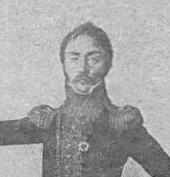 Général de brigade who was killed at Borodino

Next Colonel Huard de Saint-Aubin served in Switzerland under Ney from 1802 to 1803. Afterwards he joined the Army of Naples where he stayed until 1806. At the end of 1806 he fought at the siege of Amantea, and then in 1807 he received a promotion to général de brigade. General Huard de Saint-Aubin continued to serve in Italy, and in 1808 he was rewarded as a Commander of the Order of Two Sicilies. In 1809 he took command of the 1st Brigade of Lamarque's division in the Army of Italy, and he fought at Wagram where he was wounded. Afterwards, he was named a Commander of the Legion of Honor and in 1810 he became a Baron of the Empire.