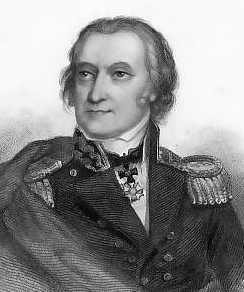 Polish general who served in Italy, on the Rhine, and in Russia

A Polish officer, Karol Kniaziewicz, known as Charles to the French, began his military career by entering the military school of Warsaw. Sent to the artillery school next, he entered the Royal Polish Artillery Corps in 1777 and then was promoted to lieutenant in 1784. Six years later Kniaziewicz received a promotion to captain, and then in 1792 he was promoted to major and served against Russia during the war that year. Seeing action, he fought at Doriczkowce and Zielence in June and then at Dubienka in July. In 1794 Kniaziewicz served during the Kosciuszko Uprising as chief of staff to General Zayonchek. He fought at Chelm that June and then distinguished himself at the combat of Golkow in July. Promotions to colonel and then general of brigade followed shortly thereafter and Kniaziewicz took part in helping to lift the siege of Warsaw. That December he commanded the left wing at the Battle of Macejowice but he was taken prisoner along with General Kosciuszko by the Russians.

When Tsar Paul assumed power in 1796 after the death of his mother, he released the Polish leaders held prisoner, including Kniaziewicz. Kniaziewicz first went to Kukow but then in the summer of 1797 he traveled to Italy to join the 2nd Polish Legion as a général de brigade under General Dombrowski. Now serving with the French, he occupied Rimini and then in 1798 he seized Fort Saint-Léon and Lorette. Placed with the Army of Rome, Kniaziewicz served under Macdonald at Civita Castellana in December and then defeated the Neapolitans at Fabrica. Next he seized Gaeta and then in March he was given the honor of taking the captured enemy flags back to Paris to the Directory.

In November of 1799 Kniaziewicz was sent to Strasbourg to organize a new Polish legion. Employed with the Army of the Rhine in 1800, he fought at the combats of Offenbach, Hattersheim, Sindlingen, Hoechst, and Geistheim that year. That November Kniaziewicz joined Decaen's division and then in December he distinguished himself at the Battle of Hohenlinden. During the years of peace that followed, Kniaziewicz was initially sent to Italy but he resigned his command in May of 1801 due to his disappointment with Napoleon's lack of action to restore Poland. Kniaziewicz returned to Poland to reside in Wolhynie, but neverthelesshe was named a Commander of the Legion of Honor in n1804.

Kniaziewicz returned to active military service in May of 1812, joining the Grande Armée for the campaign against Russia. Appointed a général de division of the Grand Duchy of Warsaw, he was initially attached to Jerome Bonaparte's VIII Corps but in July he was given command of the 18th Infantry Division of Poniatowski's V Corps. Kniaziewicz served at Smolensk in August and then Borodino in September, and during the retreat he served in the rear guard. That November he fought at Wiazma and Doubrovna before fighting at the Berezina where he was badly wounded in the leg. Too badly wounded to continue to fight, Kniaziewicz retired to Krakow and then Lublin.

Kniaziewicz was appointed a Commander of the Military Order of the Grand Duchy of Warsaw, but after Russia resumed control of Poland he was appointed a member of the committee of war that was ordered by Tsar Alexander to organize the Polish army. Kniaziewicz resigned from the committee in December of 1814 and then moved to Dresden. In 1824 he traveled briefly to Paris before returning to Dresden, and then in 1825 after Tsar Nicolas I took power in Russia, he refused to swear an oath of loyalty to the tsar. In response Kniaziewicz was accused of conspiracy, but the King of Saxony refused to extradite him to Russia. He remained in Saxony until 1830 when he moved to Paris to take part in the Polish government in exile.