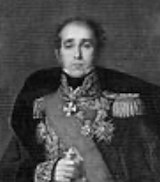 General who served in Austria, Prussia, and Spain

During the years of peace that followed, Liger-Belair served at the camp of Montreuil as chief of staff to Tilly's cavalry division. When war broke out in 1805, he joined Marshal Ney's staff in VI Corps and participated in the campaign in Austria that year. The next year Liger-Belair participated in the campaign against Prussia and he notably signed the surrender of Magdebourg that November. A week later he was promoted to général de brigade. The next month Liger-Belair won at Gollup and then fought at Soldau, and at the end of the year he took command of the 1st Brigade of Marchand's division in VI Corps. In February of 1807 Liger-Belair won at Peterswalde and then in March he organized the defense of the canal of Bromberg and then was named commander at Marienwerder.

After the Treaty of Tilsit in 1807, General Liger-Belair was named commander of a brigade of Malher's division, but he fell ill and instead went on leave for a number of months. By March of 1808 he was finally well enough to serve again and in May he took a command in Vedel's division in the corps commanded by General Dupont. That June Liger-Belair seized Valdapenas and then in July he was repulsed at Menjibar. When Dupont surrendered at Bailen, Liger-Belair was taken prisoner by the terms of the surrender like the other French soldiers. However, he was sent by ship back to France and he arrived at Marseille in November.

Liger-Belair was next sent back to Spain to serve in the French army, and he was named commander of the province of Vittoria in December of 1808. In 1809 he became a Baron of the Empire and that year he served under Sébastiani in IV Corps and fought at Almonacid. Throughout 1810 and 1811 Liger-Belair served in Andalucia and he was promoted to général de division in July of 1811. He returned to France in December of 1811.

In 1813 Liger-Belair took command of the 31st military division where he remained until September when he took command of the 18th military division. In January he evacuated Dijon and was then replaced by General Allix and called to Paris to explain his conduct. His explanation for the evacuation of Dijon must not have been strong enough, for Liger-Belair did not hold a command under Napoleon's government again. Only after the Bourbons were restored did he receive a command, returning to the 18th military division. When Napoleon escaped from Elba for the Hundred Days in 1815, Liger-Belair did not participate in the events.