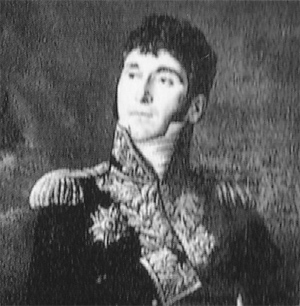 Beginning his military career at the young age of sixteen, Joachim-Jérôme Quiot du Passage joined the 3rd Battalion of Drôme as a grenadier in the fall of 1791. Sent to the Army of the Alps, he was promoted to capitaine in January of 1793 and then sent to the Army of the Eastern Pyrenees. After peace was obtained with Spain, in 1795 Quiot du Passage was sent to the Army of Italy. He served throughout General Bonaparte's campaign in Italy of 1796 and that May he became an aide-de-camp to General Victor. During the campaign he was wounded in July of 1796 at Rivoli.

In 1805 Quiot du Passage returned to France and became an aide-de-camp to Marshal Lannes. He participated in the campaign of 1805 and after its successful conclusion he was promoted to colonel of the 100th of the Line in General Gazan's division. The next year Quiot du Passage took part in the campaign against Prussia and he fought at the Battle of Jena where he was wounded by a shot to the right arm. He continued to serve with La Grande Armée in the War of Fourth Coalition through 1807.

In 1808 Quiot du Passage was transferred to the Army of Spain and he was also made a Baron of the Empire. Serving throughout the Spanish Peninsula for the next few years, in February of 1811 he was at the Siege of Badajoz when he was wounded by grapeshot in the head. 1811 continued to be a busy year for Quiot du Passage, as he fought at Gebora and Campo-Mayor before being wounded at Albuera by a bayonet to the left thigh. A promotion to général de brigade followed that May and he took command of the 2nd Brigade of Claparéde's division of V Corps in the Army of the South. Quiot du Passage went on to lead his brigade to victory at Ballesteros in August. In early 1812 he took command of the 1st Brigade of Darricau's 6th division, and then in August he left Spain and went to the camp of Utrecht.

Quiot du Passage resumed an active command during the summer of 1813 when he took command of the 2nd Brigade of Teste's 23rd Division of I Corps. Thrust into the fighting in Germany, that August he was hit at the Battle of Kulm by a shot to the scapula and right shoulder, badly wounding him, and he was taken prisoner. He was finally allowed to return to France in May of 1814 where the restored Bourbons named him a Knight of Saint Louis and gave him command of the département of Drôme.

When Napoleon resumed power in 1815 for the Hundred Days, Quiot du Passage rallied to him. Quiot du Passage was given command of a brigade in the 1st Division of I Corps of the Army of the North, and he led them into action at the Battle of Waterloo. Despite rallying to Napoleon, he remained in favor with the restored Bourbons and continued a successful career.