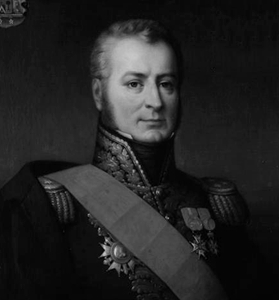 Artillery commander who served in many notable campaigns

The son of a prosecutor, Charles Étienne François Ruty first studied at the college of Besançon and then in September of 1792 he entered the artillery school of Châlons as a sous-lieutenant. He left the school in November of 1793 and began serving with the Army of the North, and in June of 1794 he was promoted to lieutenant in the 2nd Foot Artillery. Later Ruty fought at the combat of Comines where he was wounded in the leg by the blast of a shell. In 1796 he was promoted to capitaine in the Army of the Rhine and Moselle and at the end of the year he served at the Siege of Kehl where he was again wounded, this time in the jaw.

In 1798 Ruty joined the Army of the Orient and after arriving in Egypt that July he was promoted to chef de bataillon. For the expedition to Syria, he took command of the artillery of General Kléber's division. After returning to Egypt, Ruty was named director of the artillery park and he fought at the Battle of Abukir in July of 1799. That November he fought at the combat of Damietta under Verdier. After returning to France, in December of 1801 Ruty was promoted to chef de brigade, commanding the 4th Foot Artillery. The next month he was named director of artillery at Perpignan.

In 1804 Ruty served in garrison at Grenoble and then in 1805 when the Grande Armée marched to confront the Third Coalition Ruty became director of the artillery park of Marshal Ney's VI Corps. He served throughout the campaign of 1805 and then in October of 1806 he was sent to Wesel. Receiving a promotion to général de brigade in January of 1807, Ruty then took command of the artillery of Marshal Murat's Cavalry Reserve. That summer he fought at the Battle of Friedland.

In January of 1813 Ruty was promoted to général de division and that April he took command of the artillery of Marshal Oudinot's XII Corps. He served throughout the campaign in Saxony that year and he was named a Count of the Empire in November. During the defense of France in 1814, Ruty served as chief of staff of the artillery in Champagne. After Napoleon's abdication and the Bourbon Restoration, the Bourbons named Ruty a member of the committee of war, a Knight of Saint Louis, and a Grand Officer of the Legion of Honor. Nevertheless, when Napoleon returned from exile in 1815, Ruty rallied to him. Ruty was named inspector general of the artillery of the Army of the North and he took part in the campaign in Belgium that June. After the Hundred Days, he continued to have a successful career in the military.