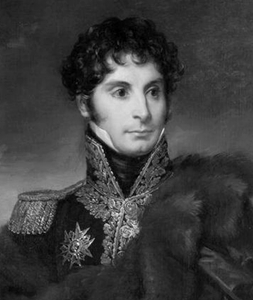 Staff officer best known for his many literary works

Coming from a distinguished military family, Philippe-Paul de Ségur's grandfather was a Marshal of France and his father served under Rochambeau during the American Revolutionary War. Philippe-Paul de Ségur enlisted in the cavalry in 1800, joining as a hussar and shortly thereafter he was commissioned as a sous-lieutenant and assigned to the Army of the Rhine. Later that year he became an aide-de-camp to General Macdonald and he followed Macdonald on a mission to Denmark. In 1802 Ségur was promoted to lieutenant and he became an aide-de-camp to General Beurnonville and then in 1803 he received a promotion to capitaine.

At the end of 1804, Ségur gained a position on the staff of the imperial staff due to the influence of General Duroc. When war broke out in 1805, he was employed on the staff of the Grande Armée and that October he took part in the negotiations for the surrender at Ulm. Ségur served in Naples in 1806, receiving a promotion to chef d'escadrons in the 13th Chasseurs à Cheval and assisting at the siege of Gaeta. When it became clear that Prussia would declare war on France, Ségur was recalled to the Grande Armée to serve on the staff again. On Christmas Eve of 1806, he fought at Nasielsk where he was wounded by two blows of a lance. When the campaign resumed in the spring of 1807, Ségur was captured by the Russians in May and then sent as a prisoner of war to Moscow. He was released after the Treaty of Tilsit and then appointed major in the 2nd Hussars.

In July of 1808 Ségur joined the 6th Hussars as major and a few months later he took part in the Battle of Somosierra where he was wounded twice. He returned to France with the imperial staff, remaining by Duroc's side throughout the campaign of 1809 against Austria. After the conclusion of the campaign, Ségur was promoted to colonel of the Chevau-Légers of the National Guard of Paris and then named a Count. He was next sent on diplomatic missions to Austria and Russia.

In 1812 Ségur received a promotion to général de brigade and he once again served on the imperial staff throughout the campaign against Russia of that year. After surviving the retreat from Russia, in April of 1813 he was named commander of the 3rd Regiment of the Guards of Honor. Ségur served during the campaign in Germany and fought at Leipzig and Hanau. For the defense of France of 1814, Ségur took command of a brigade of the Guards of Honor in Defrance's division. After fighting at Montmirail in February, he served at Reims in March where he distinguished himself in a charge but was also wounded by a bayonet and a shot.

After Napoleon's abdication in 1814, the restored Bourbons named Ségur a Knight of Saint Louis and appointed him chief of staff of the cavalry of the 6th military division. When Napoleon resumed power in 1815 for the Hundred Days, Ségur rallied to him and was named chief of staff to General Valence. With General Valence he helped to organize the defense of the left bank of the Seine, but after Napoleon's second abdication he was put on non-activity for having supported Napoleon.

In 1824 Ségur published a book on the Russian campaign of 1812 which Gourgaud, who had also served on the imperial staff during that campaign, openly criticized. Ségur challenged Gourgaud to a duel which was accepted, though he lost the duel and was wounded by Gourgaud.