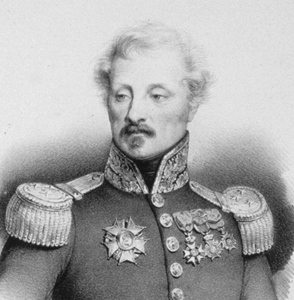 Joining the army during the Revolution at age eighteen, Marc-François-Jérôme Wolff enlisted in the 2nd Chasseurs a Chéval in July of 1794. Serving with the Army of the Rhine, in October of 1795 he was serving at Mannheim when he was wounded by a shot to the thigh during the night and taken as a prisoner of war. Wolff was released from captivity six months later in April of 1796. Three years later in 1799 he was commissioned as a sous-lieutenant in the 5th Dragoons. He served in Belgium that year and then in 1800 he was promoted to lieutenant and served in the Army of the West.

In 1803 Wolff was sent to serve in the Army of the Coasts and he became an aide-de-camp to Louis Bonaparte. The next year he was promoted to capitaine and he joined the 18th Dragoons. In 1805 Wolff joined the staff of the Cavalry Reserve and he served in this role for the next few years. During the Prussian campaign of 1806 he was promoted to chef d'escadrons in November, and then in February of 1807 he was wounded at Ostrolenka. At the end of 1807 Wolff was authorized to pass to the service of the newly created Kingdom of Westphalia. While serving in Westphalia Wolff organized the cavalry, served in the Royal Guard of Jérôme Bonaparte, and was promoted to colonel. In 1809 he led a brigade of Westphalian cavalry to join the Army of Germany to assist the French in the Danube campaign of 1809. In 1811 Wolff was named a Knight of the Order of the Crown of Westphalia.

In April of 1812 Wolff was promoted to général de brigade and he took command of the 1st Brigade of Westphalian Cavalry in the VIII Corps of the Grande Armée. He and his men served in the Russian campaign but when King Jérôme left the army that August Wolff accompanied him. In early 1813 Wolff was named an aide-de-camp to Jérôme Bonaparte. That March he commanded the troops defending Harz and then in April he took command of the light cavalry of Marshal Marmont's VI Corps. In July of 1813 Wolff took command of the 29th Light Cavalry Brigade composed of Westphalians, Bavarians, and Hessians that served as part of Marshal Oudinot's XII Corps. At the end of August Wolff fought near the village of Feldheim where he was wounded by a shot to the right shoulder. Napoleon sent Wolff back to serve with his brother Jérôme and the two of them returned to France in October. Wolff served in command of a brigade of light cavalry, finally commanding the 28th Brigade of the 6th Light Cavalry Division under General Jacquinot.

After Napoleon's abdication in April of 1814, the restored Bourbons backdated Wolff's service and named him a maréchal de camp of France from November 7th, 1813, and they named him a Knight of Saint Louis. However, they they also put Wolff on non-activity. When Napoleon returned from exile to resume power for the Hundred Days of 1815, Wolff again became an aide-de-camp to Jérôme Bonaparte. He served with Jérôme in the 6th Division of Reille's II Corps in the Army of the North during the short campaign that June. Afterwards Wolff was sent on a mission to Orléans and then put on non-activity.