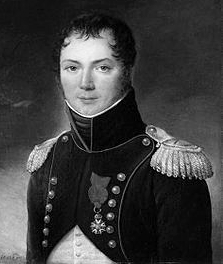 After enrolling in the military school of Pont-à-Mousson, Charles-Claude Jacquinot began his military career as a lieutenant of grenadiers in the 1st Battalion of Meurthe in August of 1791. The next year he served in the Army of the Center before serving in the Army of the North and fighting at Crois-au-Bois where he was wounded by the blast of a shell. Jacquinot continued to serve, fighting at Jemappes that November and then transferring to the cavalry in February of 1793 as a sous-lieutenant in the 1st Chasseurs à Cheval. Now serving with the Army of the Moselle, he fought at Fleurus in June of 1794 before his unit was merged into the newly formed Army of the Sambre and Meuse. That autumn Jacquinot was promoted to lieutenant in the cavalry and he fought at the Battle of the Roer.

During the years of peace that followed, Jacquinot was placed in garrison at Verdun until he was sent to the camp of Bruges in 1803. That year he was appointed a major in the 5th Chasseurs à Cheval and he then joined the Army of Hanover. When war broke out in 1805, Jacquinot took part in the campaign and at Austerlitz that December he served as Duroc's aide-de-camp. Barely more than a month after Austerlitz Jacquinot received a promotion to colonel of the 11th Chasseurs à Cheval in the IV Corps. When Grande Armée went on campaign in October of 1806 against Prussia, Jacquinot led his men into action, charging at Jena where he was wounded. Continuing to serve on the campaign, he fought at Lubeck and then Pultusk before his unit was designated as part of Lasalle's division. Jacquinot and his men then served at the Battle of Eylau in February of 1807 before they were sent to the Vistula Spit.

In 1808 Jacquinot was named a Baron of the Empire and then in January of 1809 he and his men joined Pajol's brigade in the Army of Germany. A promotion to général de brigade followed two months later and then when the Austrians attacked Bavaria that April Jacquinot took command of a brigade of chasseurs in Montbrun's division. That April he served at Abensberg and Landshut before covering the retreat at Neumarkt, and then he and his men linked up with the Army of Italy and served at Raab . Returning to join the Grande Armée, Jacquinot then fought at the Battle of Wagram in July.

General Jacquinot was granted a leave in mid-1810 to return to France. Once his leave was up, he returned to Germany to command a brigade of light cavalry and then in 1811 he was appointed the governor of Custrin. As war was brewing between France and Russia in 1812, Jacquinot was given command of a brigade of light cavalry in Bruyère's division in the Cavalry Reserve. Taking part in the campaign that summer, he served at Ostrowno, Witepsk, Smolensk , and Borodino. Once the army began its retreat, Jacquinot participated in the retreat and served at Winkowo.

For the campaigns in Germany of 1813, Jacquinot took command of the 1st Brigade of Lorge's division in the III Cavalry Corps. Serving throughout the campaign, he fought at Dennewitz in September where he was badly wounded. A promotion to général de division followed six weeks later, and then in December he was given command of the 6th Light Cavalry Division of the III Cavalry Corps. Taking part in the defense of France of 1814, Jacquinot won at Ober-Winter in January and then served under Sébastiani in Champagne. That February he joined Kellermann's VI Cavalry Corps and then fought at Bar-sur-Aube, Fontvannes, and Saint-Dizier.

After Napoleon's abdication, the restored Bourbons appointed Jacquinot as a representative to Vienna to negotiate the return of prisoners of war to France. However, the next year they put him on non-activity, and when Napoleon returned from exile and resumed power, Jacquinot rallied to him. Jacquinot took part in the campaign that June, commanding a division of light cavalry in the I Corps and fighting alongside General Subervie at Waterloo. After Napoleon's second abdication, Jacquinot was put on non-activity in early 1816.