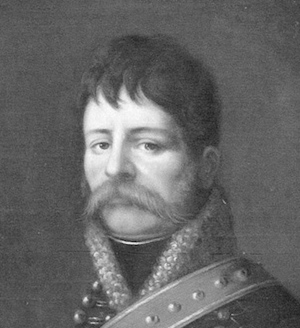 The son of a lawyer in Parlement, Auguste Jean Joseph Gilbert Ameil joined the Battalion of the Jussienne of the National Guard of Paris on the day of the storming of the Bastille, July 14th of 1789. Three years later he was serving in the Army of the North where he was a sous-lieutenant in the 10th Battalion of light infantry. In February of 1793 Ameil received a promotion to lieutenant and then in September he was promoted to capitaine. That December he served at the defense of Maubeuge on the staff and then he became an aide-de-camp to General Desjardin. In April of 1794 Ameil served at the combat of Leugnies and then when the armies were reorganized he joined the Army of the Sambre and Meuse. With them Ameil served at the sieges of Valenciennes, Condé, and Quesnoy. Next in 1795 he served in Holland and afterwards he served on the Rhine. In 1798 Ameil took part in the expedition to Ireland and then in 1799 he was promoted to chef d'escadrons in the 5th Chasseurs à Cheval. He served under General Brune in Holland in 1799 and then under General Moreau in Germany in 1800 and 1801.

During the years of peace that followed, Ameil served in Hanover. With the 5th Chasseurs à Cheval he took part in the campaign of 1805 and he was wounded by a shot to the face at Gunzburg in October of 1805. Three days later Ameil served at the action of Munich and then a week later he defeated a party of Austrians at Woerth but received multiple wounds from sabre blows in the process. After completing that campaign, the next year he was named a major of the 5th Chasseurs à Cheval. In October of 1806 he served in the Prussian campaign and he was wounded in the right arm at the combat of Halle. That November Ameil took command of a Belgian unit that would become the 27th Chassuers à Cheval and then in 1807 he served in Pomerania. In 1808 he served in Stralsund and Denmark before being called to serve in Spain. However, Ameil did not remain in Spain for long, for in March of 1809 he was arrested by his colonel for his letters and remarks and Joseph Bonaparte ordered Ameil to return to his unit's depot.

Now back in France, Ameil was called to join Montrbun's division for the Danube campaign of 1809. He served under Marshal Davout near Ratisbon and then in May he fought at the combat of Luberck where he was wounded by a shot to the head. At the end of the month Ameil was promoted to colonel and he then took command of the 24th Chasseurs à Cheval whose colonel had been badly wounded at the Battle of Aspern-Essling . Later that year he was named a Commander of the Legion of Honor, a Knight of the Order of Merit of Bavaria, and a Knight of the Epée of Sweden.

Ameil was next sent to serve at Boulogne where he remained until 1812 when he took part in the campaign against Russia. Surviving the retreat, he was promoted to général de brigade in November of 1812. For the campaign in Germany of 1813, Ameil took command of the 2nd Brigade of the 6th Cavalry Division under General Arrighi. He served at the defense of Leipzig in June. During the defense of France of 1814, Ameil served in Jacquinot's division in Champagne. That February he served at the combat of Fontvannes near Troyes.

After Napoleon's abdication in April of 1814, the restored Bourbons initially put Ameil on leave but then named him commander of the military school of Paris. He was also named a Knight of Saint Louis. However, in January of 1815 Ameil was put on non-activity, only to be recalled to service in March to serve under the Count of Artois and stop Napoleon who had escaped his exile on Elba and returned to France. Instead of serving against Napoleon, Ameil rallied to him. Napoleon then sent Ameil to Auxerre where he was arrested by those still loyal to the king. Ameil was next transported to the prison of l'Abbaye. After Napoleon reclaimed his throne without a shot being fired, he ordered Ameil's release and gave him command of the 2nd Brigade of the 4th Cavalry Division. Ameil served at the Battle of Waterloo and afterwards he was named a général de division with the Army of the Loire. This promotion did not last, for he was proscribed by the once again restored Bourbons in the ordonnance of July 24th, 1815. Ameil took refuge in England and then Hanover. In the meantime he had been condemned to die in absentia by a council of war in France. While Ameil was taking refuge from France, he lost his mind and was arrested at Lunebourg. He was incarcerated at Hildesheim and eventually he was amnestied by the French government in 1821.