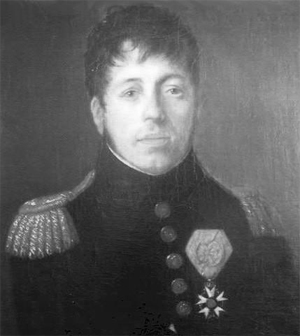 Volunteering during the Revolution, Louis Léger Boyeldieu began his military career as a sous-lieutenant of the 3rd Battalion of Volunteers of the Somme in 1791. Over the next three years he served with the Army of the North, receiving a promotion to lieutenant in 1792 and another to capitaine in 1794. From 1794 to 1796 Boyeldieu served on campaign with the Army of the Sambre and Meuse and in June of 1796 he joined the 61st Infantry Regiment. The following year he was sent to the Army of Italy.

In 1798 Boyeldieu was designated for the Army of the Orient and he set sail with the army for the Egypt. Boyeldieu served as part of General Desaix's division and he fought at the Battle of the Pyramids . Serving in Upper Egypt and the Delta, he fought at and was wounded at the action of Abukir in August of 1799. After General Bonaparte left the army to return to France, Boyeldieu remained in Egypt. In March of 1801 Boyeldieu was serving under General Friant when he was hit in the neck by a shot in the fighting around Lake Madieh. A month later the commander in Egypt, General Menou, promoted him to chef de bataillon.

Returning to France after the surrender in Egypt, Boyeldieu was assigned to the Army of the Coasts of the Ocean and in 1804 he was named a member of the Legion of Honor. Another honor soon followed, as he was appointed a chef de bataillon in the Grenadiers à Pied of the Imperial Guard in September of 1805. Boyeldieu served throughout the campaign of 1805 and afterwards he was appointed colonel of the 4th of the Line in March of 1806. For the campaign against Prussia of 1806, Boyeldieu's regiment served as part of General Leval's division. In early 1807 Boyeldieu fought at Bergfried where he was wounded by a shot to the left buttock. When the campaign resumed later that year, he well enough to return to duty and he fought at the Battle of Heilsberg. Unfortunately for Boyeldieu, he was wounded again in that battle, this time taking canister shot to his left shoulder. A month later he was made a Commander of the Legion of Honor, and the following year he received another honor, being made a Baron of the Empire.

When Austria declared war in 1809, Boyeldieu was serving in Germany with Dalesme's 2nd Brigade of Carra St. Cyr's division. Leading his men into battle, he fought at the Battle of Aspern-Essling and then the Battle of Wagram where he was wounded by a shot to the left thigh and taken prisoner. Fortunately for Boyeldieu, he was released a month later.

Boyeldieu avoided active campaigning for the next few years and In July of 1811 he received a promotion to général de brigade. For the campaign against Russia of 1812, Boyeldieu commanded the 1st Brigade of Roguet's 2nd Division of Marshal Mortier's Young Guard. After surviving the retreat from Russia, Boyeldieu was named a Knight of the Iron Crown in April of 1813. Taking part in the campaigns of Germany, he again served with the Young Guard, this time as commander of the 3rd Brigade of Barrois' 2nd Division. At the Battle of Dresden in August, Boyeldieu was wounded in his left shoulder again, this time by a single shot. His contributions did not go unnoticed though, and a few weeks later he was promoted to général de division. Unfortunately, his wounds were beginning to catch up with him, and at the end of September of 1813, he was placed on leave to recover.

Boyeldieu did not take part in the defense of France due to his wounds. After the Napoleon's abdication in April of 1814, Boyeldieu was placed on non-activity. When Napoleon resumed power in 1815 for the Hundred Days, General Boyeldieu was appointed as the commander of Toulon, but he refused the position, citing ill health from his many wounds. Two months after Napoleon's second abdication, Boyeldieu's many wounds finally caught up with him shortly and he died in August of 1815 from complications of his wounds.