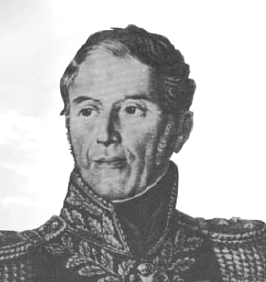 A career soldier, Théodore Chabert first enlisted in the French infantry in 1774 at age sixteen. By the time of the Revolution he was still serving with the army and his first major promotion came in September of 1793 when he became lieutenant colonel of the Battalion of Grenadiers of Villefranche at the Siege of Lyon. After the conclusion of the siege in October, Chabert was arrested. Meanwhile, that December he was promoted to général de brigade and selected to serve with the Army of the Eastern Pyrenees, but he was still under arrest. In February of 1794 the Revolutionary Commission of Lyon released Chabert and the next month he joined the Army of the Eastern Pyrenees.

Now with the Army of the Eastern Pyrenees, in May of 1794 Chabert served under General Pérignon at the camp of Boulou and the pass of Banyuls. At the time, the commander-in-chief General Dugommier noted that Chabert was a good and honorable soldier. Later that year Chabert joined Augereau's division and fought at the Battle of Montagne Noire , and afterwards he served at the Siege of Roses.

At the end of 1795 Chabert was transferred to the Army of the Alps to serve under General Kellermann. He remained there until 1798 when he was temporarily named commander of Marseille and then elected a deputy of Bouches-du-Rhône to the Council of 500. In 1799 Chabert returned to the army and joined the Army of the Danube and then the Army of Switzerland. He and his men crossed the Alps and joined up with the Army of Italy late in 1800, but they missed the major battles of the campaign. The next year he served in Italy with the Army of the South. In 1802 Chabert voted against Napoleon becoming Consul for Life, but nevertheless he was still employed. In 1803 he served in the 22nd military division and then took command of the département of Indre-et-Loire, and in 1804 he became a Commander of the Legion of Honor.

Chabert missed out on the major campaigns of 1805-1807, but at the end of 1807 he resumed an active command when he took command of the 2nd Brigade of Barbou's division in Dupont's corps. Sent into Spain the next year, in June he fought at the combat of the bridge of Alcolea. The next month Chabert was with Dupont when Dupont's corps was surrounded and Chabert negotiated the surrender of Bailen. Afterwards, he was taken as a prisoner of war until he was repatriated to France in November. Once back in France, he was immediately detained and then sent to Paris and imprisoned at l'Abbaye for his actions at Bailen.

Chabert was released but also disgraced and he remained without employment in the army so he retired to Saint-Robert. As France came under attack from the Coalition forces in 1814, he volunteered to serve under General Dessaix in Savoy in February of 1814. Chabert fought as a common soldier and served at the combat of Saint-Julien in March.

After Napoleon's abdication the next month, the restored Bourbons put Chabert on non-activity and then retired him. However, when Napoleon escaped from exile in 1815 for the Hundred Days, Chabert rallied to Napoleon to support the new government. Napoleon called Chabert to come to Paris, but instead Chabert remained with his troops in Dauphiné where he ensured the Duke of Angoulême could not attack Grenoble. In the meantime he also convinced General Gardane and his troops to rally to Napoleon. Next Chabert was promoted to général de division and he took command of the National Guard of Dauphiné. His command became a reserve division in the Army of the Alps under Marshal Suchet, and he served under Suchet for the remainder of the Hundred Days. When the Bourbons were restored to the French throne again, Chabert supported them and their government but his rank was also reset back to général de brigade.