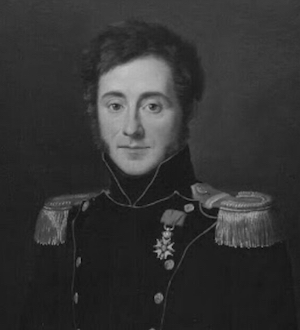 The son of a member of the National Convention, Eléonore Bernard Anne Christophe Zoa Dufriche de Valazé entered the École Polytechnique in December of 1798. Two years later he left as a sous-lieutenant to attend the engineering school of Metz. Promoted to lieutenant at the end of 1801, Dufriche de Valazé was next employed at Cherbourg. In 1803 he was sent to the Army of Hanover where he served in the staff and that October he was promoted to capitaine.

In 1813 Dufriche de Valazé served in Saxony as commander of the engineers of Marshal Ney's III Corps. That May he served at the battles of Lützen and Bautzen and in August he was named a Commander of the Legion of Honor and promoted to général de brigade. In September Dufriche de Valazé took command of the engineers of Marshal Macdonald's XI Corps and in October he served at the Battle of Leipzig and the Battle of Hanau. For the defense of France of 1814, he served in Champagne and in March he served at Arcis-sur-Aube.

After Napoleon's abdication and the Bourbon Restoration, Dufriche de Valazé was sent to Magdebourg to handle the surrender of that place. He was then put on non-activity and named a Knight of Saint Louis. In 1815 Napoleon returned from exile and resumed power and Dufriche de Valazé was given command of the engineers of Gérard's IV Corps in the Army of the North. Dufriche de Valazé served in Belgium on the campaign in June and afterwards he took part in organizing the defense of Paris before joining the Army of the Loire. He was put on non-activity upon the Second Restoration but he resumed a successful military career in 1816. In 1820 he was named a Knight of the Order of the Sword of Sweden and in 1834 he was elected a deputy of Orne.